It was an honor to present the 2018 Complete Streets Champion of the Year Award to Deputy Mayor Peter O'Flinn at the Bonita Springs City Council meeting on Dec. 19th.

In presenting the award to Deputy Mayor O'Flinn, Darla Letourneau of BikeWalkLee spoke of  O'Flinn's rare combination of talents--a big picture vision along with the skill-set, passion, and focus to drive this vision to results on the ground.  "These are special gifts, and the citizens of Bonita and the larger Southwest Florida are lucky to have Peter is a leadership role in the community," said Letourneau.

"BikeWalkLee is deeply grateful to Deputy Mayor O'Flinn for serving as an inspiration and role model for elected officials, staff, and advocates throughout Southwest Florida," said Letourneau.

She also thanked the Mayor, Councilmembers, and the staff "for staying the course on this decades-long and continuing complete streets journey."

In his remarks, Vice-Mayor O'Flinn acknowledged the Council, staff, and community leaders who were all instrumental in these accomplishments.  He emphasized the importance of the context-sensitive approach that is at the core of complete streets.  This approach is a way to make sure the City's development and transportation plans are consistent with the community's vision of preserving Bonita's small city charm.


Honored as 2018 Complete Streets Champion of the Year

BikeWalkLee, a community coalition advocating for complete streets in Lee County Florida, has selected Bonita Deputy Mayor Peter O’Flinn as its 2018 Complete Streets Champion of the Year for his outstanding leadership, vision, and commitment to bringing complete streets concepts to reality on the ground in Bonita Springs.


“Today, we honor Peter O’Flinn as an outstanding champion of complete streets, not only in Bonita Springs but throughout Lee County and beyond," said BikeWalkLee’s Darla Letourneau.
“Deputy Mayor O’Flinn is a tireless leader who is focused on bringing that vision to reality one project at a time, each building on the other attracting grant funds, and gaining state and national recognition,” Letourneau continued.


BikeWalkLee has always understood that an advocacy group can only provide the spark of inspiration. For the effort to be successful and long-lasting, it must have committed government champions. The most successful efforts have elected leaders, staff and community volunteers working collaboratively towards a vision.


Bonita Springs is a shining example of a community making a paradigm shift into a new way of thinking and doing business.  The city has taken the complete streets approach and, through collaborations and partnerships, adapted and built on the foundation put in place over the past decade.

Prior to joining the Bonita Springs City Council in 2016, O’Flinn was an engaged community leader, advocating for enhancing the quality of life in Bonita through a complete streets approach.


Once on the council, he made complete streets one of his top priorities.  He has provided visionary leadership on the council, throughout the community and countywide. His goal has been to consistently advance these concepts and help educate the public about its benefits.


He has worked tirelessly with city staff to ensure a complete streets approach is incorporated into the land use planning for the city.  Just as important, he has proactively initiated the implementation of complete streets projects on the ground. These projects are immediately beneficial to improving the quality of life for residents, which then helps build a broader base of support for future action, all in support of the goal of burnishing Bonita Springs’ reputation as a great small city.
O’Flinn has provided leadership and convened residents and elected officials in the Southwest Florida region, resulting in the following:


·     Bonita Springs, working with the nationally recognized Alta Planning + Design firm, is transforming West Terry Street into a beautiful multimodal corridor with safety improvements for school children, recreational and road cyclists, and drivers alike.  This project complements the Downtown Improvement Project, for which Bonita Springs received national recognition as one of the 12 communities in the United States for its exemplary work on implementing complete streets in The Best Complete Streets Initiatives of 2017, prepared by Smart Growth America.


·     Bonita Springs partnered with the Village of Estero and the Florida Greenways and Trails Foundation to launch a long-term effort to create of a “rails-to-trails” trail, connecting the City of Bonita Springs to the Village of Estero via a 10-mile trail along the railroad right-of-way.  This joint Bonita/Estero partnership led a community campaign in 2018 to add this local segment to the statewide Priority Florida Greenways and Trails Map.  As a result of the strong show of community support, this trail segment is now on the official State Trails Map, making it eligible for state funding through the Florida Shared Use Non-motorized (SUN) Trail funds, managed by Florida Dept. of Transportation (FDOT).


o   Bonita Springs prepared a $12 million application for U.S. Dept. of Transportation’s national competitive BUILD program (previously named TIGER).  The city’s proposal ties together the Downtown Improvement Project, the West Terry Street project, and the vision for the Bonita/Estero Trail (on the railroad right-of-way), to transform the entire 5-mile Terry Street corridor that runs through the heart of Bonita Springs. If funded, the project would leverage even larger transformative changes in the community.


“Thanks to Deputy Mayor O’Flinn’s visionary efforts, the citizens of Bonita Springs will have safer streets, a community with more options for getting around town, a trail that will serve present and future Bonitans for generations, and a burnished reputation as a great place to live, work, and play,” said Letourneau. “BikeWalkLee is deeply grateful to Deputy Mayor O’Flinn for his leadership and many contributions to implementing a complete streets approach in Bonita Springs, and serving as a model for other communities throughout Southwest Florida.” 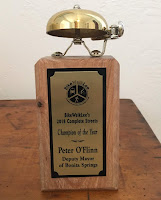