Sanibel's efforts to help reduce traffic congestion by encouraging more people to bike and walk while on Island is yielding results.  Their multi-pronged approach has many good ideas that other communities may want to try.  The best part about it...the successful strategy is essentially at little if any additional costs to the city! Thanks to the Mayor, City Council, City Manager and staff for focusing on biking and walking as one of the solutions to traffic congestion, and for making the bike/ped safety message a part of their overall traffic communications strategy.

In January the City of Sanibel launched a traffic communications strategy focused on reaching peak season visitors about ways to best enjoy their visit to Sanibel. One of the three key messages was "Plan in advance to travel around the Island by foot and bike." 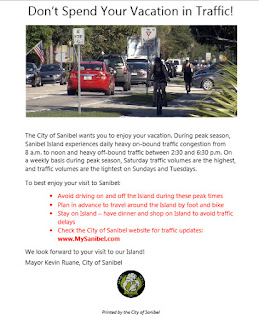 Since 2012, the City of Sanibel has promoted itself as a "walkable and bikeable" community, and its weekly "special events" press releases, as well as its emails to Sanibel residents, encourages people to bike or walk rather than drive to these special events. Over the past 4 years, the City has continuously emphasized and enhanced this message.

This year they developed a special logo that appears on the city's weekly special events press release, with message "Bike or Hike Sanibel and leave your car behind!"

It's gratifying to see that the Sanibel message is resulting in more people biking and walking as a mode of transportation, esp. to special events on weekends.  As City Manager Judie A. Zimomra reported to the City Council on Feb. 18th:
"This past weekend when we hosted three public events (the Rotary Art Fair, the Farmers’ Market and the Outdoor Boler Garden Jazz Concert) over two days in our public space we did experience a noticeable increase in biking and hiking to, from and between events (see attached photos). The Rotary Art Fair was attended by just over 4,000 on Saturday and 2,600 on Sunday. Though we did experience heavy Periwinkle vehicular traffic on both days we never did reach gridlock on either day. We are continuing to adjust our bike and hike friendly special event accommodations for further improvement."


This year, the City started including a shared use path safety message from the Police Chief in most of the weekly press releases.  Here's a sample of some of the safety messages:
This past week, they had yet another creative way to communicate the message, as shown in the press release below:

When you bike on Sanibel bike like your neighbor Marty Arnowitz..... 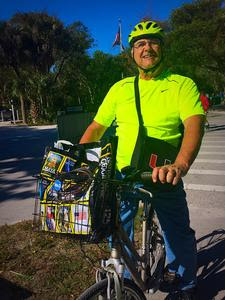 Sanibel resident Marty Arnowitz models good cyclist behavior when he bikes to the Sanibel Farmers Market.  Marty wears his helmet, which is required by Florida law by cyclist 15 years old and younger but a good idea for all bikers.  He wears bright, highly visible clothing so he can easily be seen by motorists.  Consistent with State law Marty  does not wear headphones or earplugs while biking.  Marty reduces traffic and congestion when he combines his errands with his fitness and exercise.

When you Leave the Car Behind and Bike, Bike like Marty!

Last week, the City launched the next component of their traffic communications strategy--four PSAs for broadcast on the HD screens in waiting areas of Sanibel restaurants and business lobbies operated by Blue Ash Media.  Since the Fall, these same screens have been playing shared use path safety PSAs.
Click here to view the 12 slides being used around Sanibel to amplify the "Cycling on Sanibel" video.

Here's the City's traffic PSA with their biking and walking message: 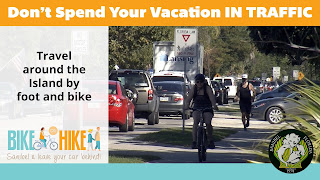 Since 2010, Sanibel has been designated by the League of American Bicyclists'(LAB) as a Bicycle Friendly Community, and was elevated to "Silver" status in 2014 (one of only four Florida communities to achieve this status).  With that designation, LAB recognized "Sanibel's commitment to improving conditions for bicycling through investments in bicycling promotion, education programs, infrastructure and pro-bicycling policies."  Integrating the biking and walking message into the City's traffic strategy is an example of what it means to be a Bicycle Friendly Community.

So, if you are a resident, a visitor, or a worker on Sanibel, try biking or walking to your next Island activity.  You'll find that it's not only the quickest and healthiest way to get around (esp. during season), but also the most enjoyable as you can experience the unique Sanibel environment and community "up close and personal."