Once again, bike/ped safety is in the national news. First, last week the Governor's Highway Safety Association (GHSA) issued a report showing that pedestrian deaths rose 10 percent in 2015 compared to 2014. This week, USDOT issued its long-awaited Safety Performance Measures, and for the first time, states and MPOs are required to set targets to reduce biking and walking fatalities and serious injuries.

GHSA Report: Pedestrian Deaths Make Up a Rising Share of U.S. Traffic FatalitiesLast week a report from the Governor’s Highway Safety Association found that pedestrians account for a growing share of total traffic fatalities in the U.S., a trend that didn’t get any better in 2015.

As reported by Angie Schmitt in Streetsblog USA 3/10/16, "Pedestrian deaths rose 10 percent in the first half of 2015 compared to the same period the year before, according to preliminary data released by the Governors Highway Safety Association. If that increase held up over all 12 months of 2015, it would be among the worst single-year changes since the GHSA started collecting data in 1975."

"In a typical year, nearly 5,000 Americans are killed while walking. While fatalities for car occupants have been dropping, pedestrian fatalities have not. As a result, pedestrian deaths now make up about 15 percent of traffic fatalities, compared to 11 percent a decade ago, according to the GHSA."

"The big question is “Why?” So far, no one has offered a compelling answer backed up with thorough research. The best we have are educated guesses. Of course, you’ll also see some wild and irresponsible victim-blaming in the media. Here are some of the potential explanations that have been put forth and some thoughts on how seriously we should take them."
Click here to continue reading the Streetsblog article.

How does Florida and Lee County Compare? 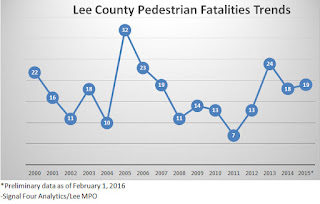 The bad news is that Florida continues to be the most dangerous state in the nation for pedestrians. In 2014 New Mexico took first place, with Florida 2nd, but in 2015, Florida returned to first place with the highest pedestrian fatality rate. In terms of the absolute number of pedestrian fatalities, Florida ranks second highest, behind CA.

Note: the GHSA report is preliminary for 2015, with just first 6 months but assumes trend continues for rest of year. Lee County data is preliminary data for the entire 12 months of 2015.

USDOT Safety Performance Measures On March 14th, FHWA announced new Safety Performance Measures (as required by MAP-21 statute) and for the first time, states and MPOs are required to set targets to reduce biking and walking fatalities and serious injuries, and to track their performance against those targets. States and MPOs will also be required to use this safety performance information in their investment programming and will be accountable for achieving their annual targets.

In issuing the new measures on March 14th, FHWA stated, "The addition of bicycle-pedestrian performance measures is an acknowledgement that non-motorized safety is of particular concern and improving conditions and safety for bicycling and walking will help create an integrated, intermodal transportation system that provides travelers with real choices."

As Andy Clarke, the past President of the League of American Bicyclists stated, “having the non-motorized measure will mean that a more holistic approach to traffic safety is likely — as safety gains for one group are less likely to be made at the expense of another if we are tracking both. We know that making the streets safer for pedestrians first and bicyclists second helps make the streets safer for everyone — the same is not necessarily true for measures that are designed to make the roads safer exclusively for cars.”