Congratulations to the News-Press "Share the Road Florida" bike safety team for the statewide recognition of their outstanding work.

By JANINE ZEITLIN and LAURA RUANE,

"The News-Press has helped to set an agenda for action that will make Lee County safer for bicyclists and pedestrians."

The News-Press was one of seven honored Saturday for being champions of bicycle and pedestrian safety at the Share the Road awards in Clermont.
“This sterling example of public service journalism, with its in-depth reportage, The News-Press has helped to set an agenda for action that will make Lee County safer for bicyclists and pedestrians,” said Tim Bustos, who presented the award to project writers, Janine Zeitlin and Laura Ruane.

Bustos is on the board of Bike Florida, which hosted the awards at part of its Share The Road Celebration of Cycling.

Bike Florida is an organization with the goal to promote safe and responsible bicycling through awareness, education and bicycle touring.

It was the first time a media organization was honored with the award.

“We created it especially to honor the groundbreaking work of The News-Press,” said a press release from Bike Florida. 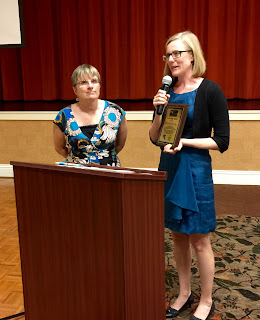