Congratulations to the City of Cape Coral for achieving "Bronze" Bicycle Friendly Community (BFC) status.  This coveted designation is the culmination of a successful partnership between the City and  Cape Coral Bike-Ped.

It was great to celebrate with City Officials, Cape Coral Bike-Ped, and VCB officials at Monday's City Council meeting.  BikeWalkLee is honored to have participated in these efforts.  Thanks to everyone who played a role in Cape Coral's BFC designation! A special thanks to Steve Clark (LAB's BFC expert) whose January visit to Cape Coral (as part of the SWFL leg of a national initiative to bring hands-on technical assistance to local areas working to make their communities more bicycle-friendly) inspired the Cape to apply for BFC designation.


It's exciting to see two of the six municipalities in Lee County (Sanibel (silver) and Cape (bronze)) achieve BFC designation. In addition to Lee County, Naples (bronze) (in Collier County) joined the club today, and Venice (silver) (in Sarasota County) was the first in SWFL.  BWL's dream is that more communities throughout Lee County will seek to achieve BFC status, so that all of SWFL will someday be bicycle-friendly.

Link to national announcement from League of American Bicyclists

Link to News-Press 11/19/15 VCB Director column: Thankful for sun, sand, songs in SWFL " I am so grateful we have another bicycle-friendly community in our county. The League of American Bicyclists awarded Cape Coral the bronze level Bicycle Friendly Community designation this week for the city’s exceptional 90-mile network of interconnected bicycle and pedestrian friendly paths. Sanibel Island has also been recognized."

CAPE CORAL, FL (November 16, 2015) -- The League of American Bicyclists today awarded Cape Coral, Florida the bronze level Bicycle Friendly Community (BFC) designation in recognition of the city’s accomplishments in creating a 90-mile network of interconnected bicycle and pedestrian friendly paths. The City of Cape Coral joins a distinguished group of only 351 communities in the nation recognized with this prestigious award.

“This is a significant achievement for Cape Coral and reflects our commitment to improving the quality of life for our citizens,” said Mayor Marni Sawicki.  “Our goal has been to create safer bicycling opportunities in our community, and we have made significant strides toward that goal thanks to our partnership with Cape Coral Bike Ped.”

“We applaud the visionary leaders and dedicated citizens of Cape Coral for making bicycling a safe and convenient option for transportation and recreation,” said Bill Nesper, vice president of programs at the League of American Bicyclists. 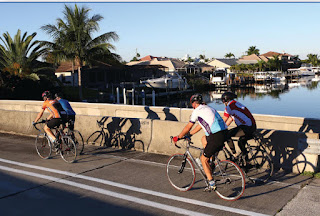 The BFC program is revolutionizing the way communities evaluate their quality of life, sustainability and transportation networks while allowing them to benchmark their progress toward improving bicycle friendliness.  The award recognizes Cape Coral’s commitment to improving conditions for bicycling through education, infrastructure and pro-bicycling policies.

Dan Moser, a long-time bicycle/pedestrian advocate and traffic safety professional, said “Cape Coral has made tremendous progress in its efforts to become a true bike-friendly community.”

Within only a few short years, the public-private partnership between the City of Cape Coral, the volunteer group Cape Coral Bike Ped and community leaders has created a network of seven dedicated bike routes that encourage residents and visitors to discover landmarks, facilities and recreational activities throughout the city.  The interconnected routes border nature preserves, scenic canals, marinas, golf courses and the Caloosahatchee River. 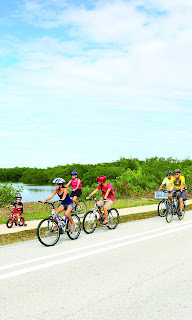 “As the champion for the FDOT Bike Ped Safety Initiative and Complete Streets effort, I’d like to congratulate the City of Cape Coral for making the kind of concerted efforts being rewarded by this recognition,” said FDOT District One Secretary Billy Hattaway.  “Because the city is in Lee County, one of the 15 counties in the state with the highest number of bicycling and pedestrian incidents, it is especially noteworthy that the city has made pedestrian and bicycling safety a priority.”

“Most people who visit Southwest Florida want to spend time outdoors,” said Tamara Pigott, executive director of the Lee County Visitor & Convention Bureau. “This impressive bicycle-friendly designation is an asset to the entire community. Safe biking paths offer locals and visitors the chance to spend even more time exploring our slice of paradise.”

Supporters of Cape Coral Bike Ped explained they are already working toward achieving the silver level BFC designation through the following efforts:

The League of American Bicyclists is leading the movement to create a Bicycle Friendly America for everyone. As leaders their commitment is to listen and learn, define standards and share practices to engage diverse communities and build a powerful, unified voice for change.  See www.bikeleague.org/BFA .