Great to see 70 participants in Friday night's first Critical Mass Ride in Cape Coral.  The event was covered by NBC-2 News. The next ride will be Saturday Dec. 26th.  Then the following rides will be on the last Friday of every month.  If you're interested in leading this monthly ride, please contact Mike Swanson. 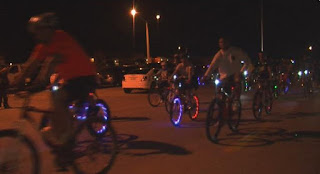 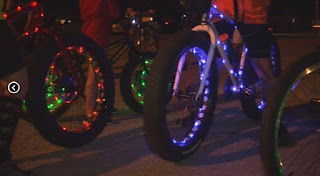 Downtown Cape Coral was filled with the lights and sounds of bells and whistles Friday night as Southwest Florida's bike advocate group Critical Mass held their first event.
- Using our app? CLICK HERE to watch video
"It's what we're here for... We go out there. We do our rides. It's fun, and it also shows the awareness," said biker Darlene Flynn.
It comes on the heels of the city earning its first ever bronze award from the League of American Bicyclists. But it also comes as accidents involving bicycles remain high in Southwest Florida.
Lee County is the third deadliest for bikers in the state. Group organizers said the rides are all about spreading awareness and reminding other bikers to stay as visible as possible.
"We're just a good, fun group, and it brings a lot of people together, and you open some eyes up," said Rob Seibert, a member of SWFL's Critical Mass. "When you have a couple hundred..., 300 bicycles out there well lit up, it says an awful lot."
If you're interested in joining, check out their Facebook page. 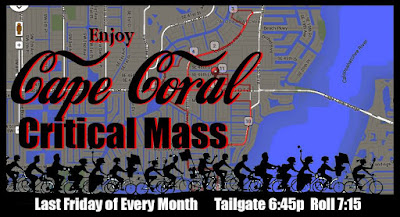 The popular Critical Mass Ride in Fort Myers is expanding to Cape Coral starting  Friday, November 27.. Plans are to have the ride monthly on the last Friday of the month. The ride is about 10 miles starting at 7 PM. Lights and helmets are required. This is a slow paced ride and many of the riders add decorative lights to their bikes. Starts in the parking lot where the Saturday Farmer’s market is held, SE 10th PL between SE 46th LN and SE 47th Ter (closest address is 4634 SE 10thPL). Learn more about Critical Mass on their Facebook page.
Posted by Darla at 11/25/2015 09:39:00 AM