Congratulations to BikeWalkLee's own Dan Moser who received an award from Florida Bicycle Association (FBA) for his many contributions to making Florida and Lee County a more bike/ped-friendly place.  And thanks to News-Press' Craig Handel for his great feature story about Dan's contributions to our community.  Love the front page highlight!  Below is both the News-Press story and BikeWalkLee's write-up and photos from the award event at Friday's Critical Mass Ride. 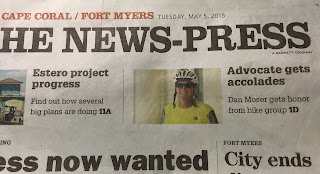 Depending on one’s point of view, Dan Moser either has been a voice in the wilderness or a PITA — pain in the arse.

For more than 25 years, the Fort Myers resident has butted heads with local decision-makers over safe pathways for bicyclists and pedestrians. His advocacy got the attention of others who formed groups including BikeWalkLee.
Moser also has instructed, assessed and evaluated walkers, bicyclists and even motorists on rules of the road. Just about anything involving bicycle or pedestrian safety in Lee County, he has his thumb on.
He’s also involved with EMS, as well as Walk Wisely and the Florida Traffic and Bike Safety Education.

And if you’re a competitive cyclist or runner, there’s a good chance he either competed against you or was along the course as a volunteer for the event.

These years of dedication led the Florida Bicycle Association — another group Moser was involved with — to honor him with special recognition, a lifetime achievement award if you will.

“Dan’s outgoing personality, tireless energy, especially at special events, and overall knowledge of bicycle education are just a few of his strengths,” the award says.

Moser downplayed the honor, calling it a “gold watch sort of thing.”

But long-time friend Jay Anderson said the acknowledgment is earned.

“It’s people like him that make a difference in our community,” Anderson said. “That’s extremely important.”

Darla Letourneau, who works with Moser on BikeWalkLee, said, “He’s the pereminent safety expert. He knows every road in the county and how it got the way it was.”

Glenda Wolnik, Moser’s supervisor while being Nursing Supervisor of the Injury Prevention Program until her retirement in 2007, said Moser mainly managed himself because he had the best interest of the people.

“I used to get some interesting calls from people about Dan and they’d go on and on and I’d say, ‘Who’s gonna do it if Dan doesn’t do it? Who’s gonna take this abuse?’” Wolnick said. “If I have to err, I have to err on the side of good. I love his passion.

“People like that, you either love them or hate them. He’d say, ‘I’m not a politician. I’m a dedicated, bike-pedestrian enthusiast.’ His real skill is love for people of this county. His integrity cannot be questioned. He doesn’t say anything without having proof behind it.”

Moser understands that his vocal opinions and outspokenness have at times made him a polarizing figure.

“You lose the pit bull after so many decades,” he said. “It’s not always the best approach. The main thing is to be there and show up and keep track of things and get the information out and check if government is doing or not doing what it should. Persistence.”

A person who practices what he preaches, Moser bikes about 2,500 miles a year. His goal would be to make the roads safe enough that people exercising could do it in their neighborhoods.

“It doesn’t make sense to me for someone to leave their home and drive somewhere to go on a stationary bike,” Moser said. “It would be nice for parents to let their children ride, or bike to work but I look at the conditions now and I can see why.” 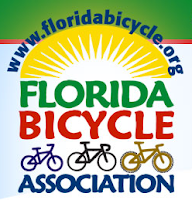 On May 1st, FBA Board member Earl Lang, presented Dan with his award before the SWFL Critical Mass May Day ride in downtown Fort Myers on Friday night. A crowd of 326 Dan fans and riders were there to cheer Dan's many contributions to better biking and walking in Lee County. Dan encouraged everyone to get involved--to become advocates, to ask elected officials to make more investments in bike/ped facilities and to make our roadways safer for vulnerable road users.
Florida Bicycle Association awards are presented to worthy recipients for their contributions to bicycling. The purpose of the awards is to bring attention to the efforts and achievements of groups, organizations and individuals that help shape our vision for all Florida bicyclists to be safe, respected and encouraged to bicycle for transportation and recreation. Over the past 15 years that FBA has presented these awards, Lee County recipients have frequently been among the awardees. This year, 3 of the 16 award winners are from Lee County. We will be reporting on each of the award winners at the time that FBA makes the award presentations in person, so stay tuned! (link to previous blog to Lisa Indovino's April 16th award presentation).  Click here to read about the FBA award program and the narratives on all the 2014 award winners.

Here's a link to the full photo album from the May 1st award presentation and SWFL Critical Mass Ride.

Dan has worn many hats during his association with FBA that began in 1998 when joined the board of directors. His leadership and expertise helped pave the way for the many successes FBA has achieve over the years. In 2008 he resigned from the board but was quickly put to work on a contractual basis as the conference director for FBA’s 2008 ProBike/ProWalk Florida conference. His duties expanded to the role of program director, a position he held until the fall of 2014. Dan’s outgoing personality, tireless energy, especially at special events, and overall knowledge of bicycle education are just a few of his strengths.

In addition to Dan’s FBA duties, he consulted with a variety of organizations throughout Southwest Florida to teach injury prevention, driver education and bicycle/pedestrian education. As a regional trainer for the Florida Traffic and Bicycle Safety Education program, League Cycling Instructor and CyclingSavvy Instructor, Dan has taught 100’s of students of all ages. Along with Dan’s teaching skills, he is a founding member of BikeWalkLee and serves on its steering group. He has served in leadership positions on the City of Fort Myers Bicycle/Pedestrian Advisory Board, Lee County BPAC, Lee MPO Bicycle/Pedestrian Coordinating Committee, Lee County Injury Prevention Coalition, Healthy Lee Coalition and the Fort Myers Track Club. He also writes a column for The News-Press and is involved with the organization of just about every running, biking, walking or festival throughout Lee and surrounding counties. As a Lee County resident for over 40 years, 25 of which as a devoted advocate for biking and walking, Dan has influenced positive change throughout Southwest Florida.

According to FBA, Scofield’s GoPro videos of being pulled over by law enforcement for cycling in the middle of the lane for his legitimate safety or of being harassed by a truck driver have sparked a flurry of discussion. He decided to use GoPro cameras on his bike after having experienced several incidents with aggressive motorists. He also began researching safe cycling on the Internet, in particular, the CyclingSavvy education program.

By positioning himself in certain places, Scofield is able to eliminate right hooks, left hooks, in-lane passing, and most other common crash causes. He prefers to wear a reflective vest, and has two flashing lights for safety, in addition to his helmet, while riding early in the morning to his Crossfit class or work.