Updated 3/1/14
Kudos again to Bike-Ped Cape Coral and the City of Cape Coral on the successful completion of the first two routes of the 90-mile bike route system for the Cape, an important milestone in making Lee County a more bikeable/walkable community!

Check out the WINK News story from the event, with great interviews with City Manager John Szerlag and Mayor Sawicki about the spirit of volunteerism and partnerships between CCBP and City staff.

Also see my photo album from the event, posted on BikeWalkLee's Facebook page.

Also thanks to CCBP's Carolyn Conant and Persides Zambrano (City of Cape Coral, Public Works) who gave an excellent presentation to the Joint Collier/Lee MPO bike/ped committees on Tuesday and generated lots of excitement about how other communities could follow the Cape's lead.  (report by Darla Letourneau) 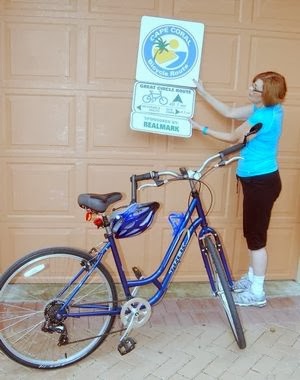 Cape Coral Bike Ped has come far enough along that there will be a ribbon cutting and informal bike ride Saturday to celebrate the first two interconnected bike routes to be completed — the Team Aubuchon (Team A) and the Chamber of Commerce of Cape Coral (CCCC) routes.

“The sponsorship is something unique,” Conant pointed out. “It’s an innovative concept.”
The concept by year’s end will result in seven interconnected routes spanning 90 miles.

Signage will begin to be placed on the Physicians’ Primary Care (PPC) route in March. When completed in July, the PPC and CCCC routes will create a nearly 50-mile-long circular route around the perimeter of the city. 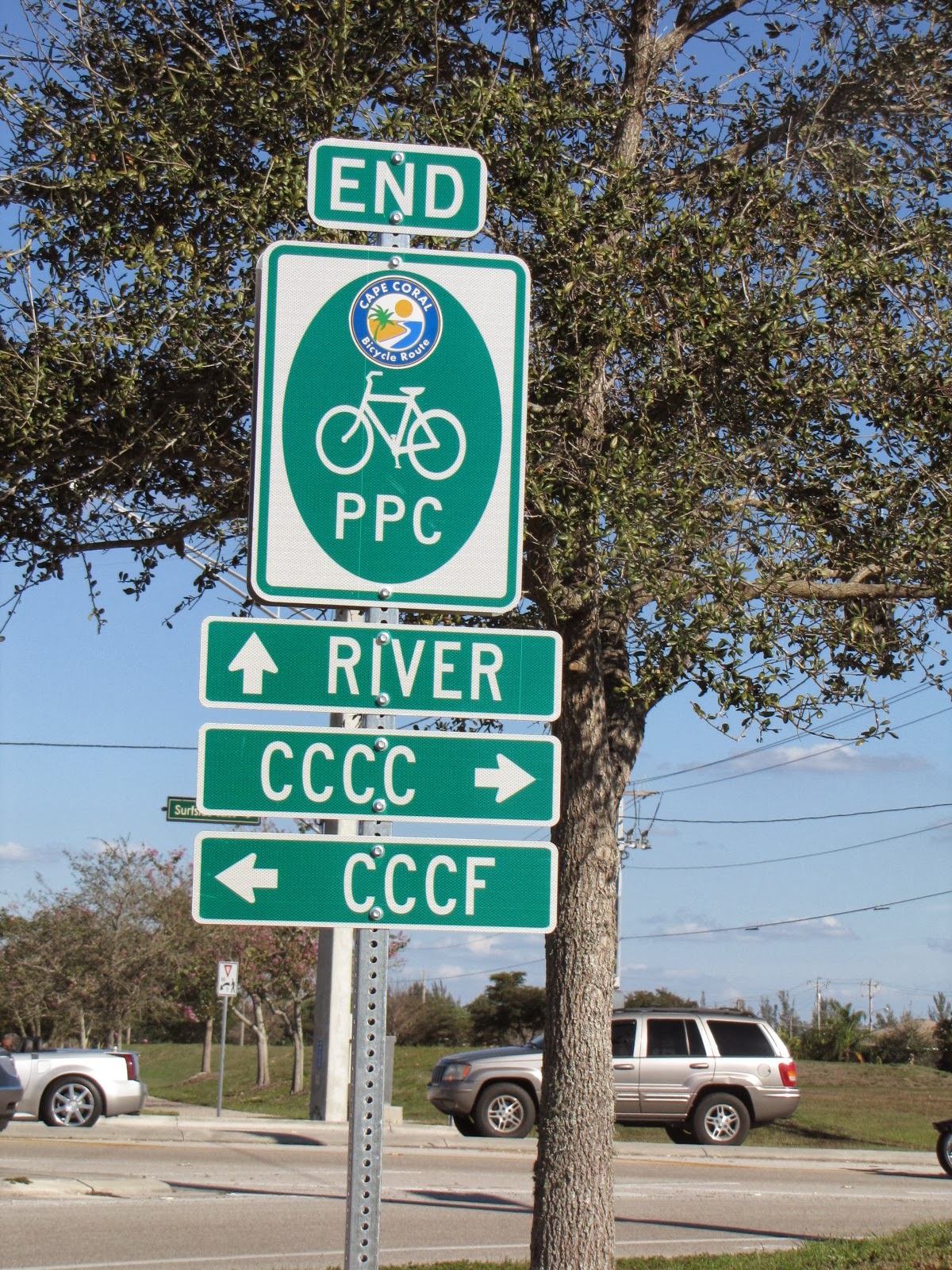 On Saturday, Mayor Marni Sawicki, City Manager John Szerlag, Dr. Mary Yankaskas from Physicians’ Primary Care, Gary Aubuchon from Team Aubuchon and Annette Carrasquillo from the Chamber will cut the ribbon on the bike route pathway, then cyclists are welcome to ride informally together on a 3-mile ride down Surfside, a 7-mile ride on Surfside (Chamber route) onto Beach & Oasis (Team Aubuchon route), or a 15-mile round trip on the Chamber and Team Aubuchon routes to Cape Harbour and back.

“This is a wonderful partnership with the city,” said Conant, noting the economic impact such a project can bring by attracting bicyclists and ecotourists to the area.

The routes are being marked with two types of distinctive signage. The first is the green-and-white traffic control signage, which is based on Florida’s new bike signage. It tells cyclists which route they are on, where to turn to stay on a route or go onto another route. In addition, other safety and information signage is being placed along the routes.

The blue-and-white “Adopt A Route” signs name the seven sponsored routes and the small sign below lists the individual sponsor for a particular sign. These are the signs used to raise the funds for these routes, but also tell the rider which route they are on. So, for instance, Physicians’ Primary Care sponsored a route and their physicians are sponsoring the individual signs on their route.

Conant is happy about how things have come together and continue to take shape.
“It’s here. It’s not a dream. It’s a reality,” she said proudly.