Kudos to the Fort Myers City Council and Healthy Lee Coalition for awards in recognition of support of the inaugural open streets event--Streets Alive!
Four members of the Streets Alive! team attended the Fort Myers City Council meeting on Monday Jan 6th to present the Council with an award of recognition for outstanding support for last November’s inaugural open streets – Streets Alive! – a community event also supported by  BikeWalkLee. 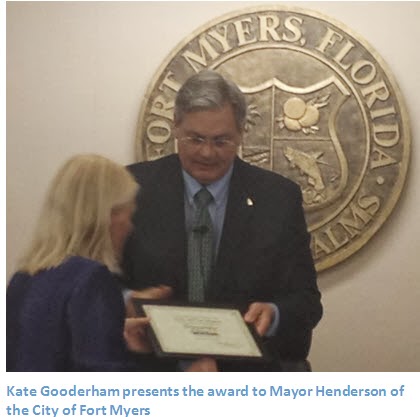 This family-friendly event featuring healthy foods and a range of healthy activities opened several miles of roadway in the downtown Fort Myers River District to fun and safe activities along a route running from near the new Library through Centennial Park.

Fort Myers City Council and staff, the CRA and the River District Alliance had all given extraordinary support to make this first event a success. Councilman Banks remarked on the many volunteers he saw helping at the event and asked if they would be returning. Streets Alive! team members referenced feedback received from evaluations sent to vendors and activity participants. All indicated positive interest in a next event. Mayor Henderson noted that the Council was aware that “there are other cities in Lee County where this event could be held, but we want it here in Fort Myers”. 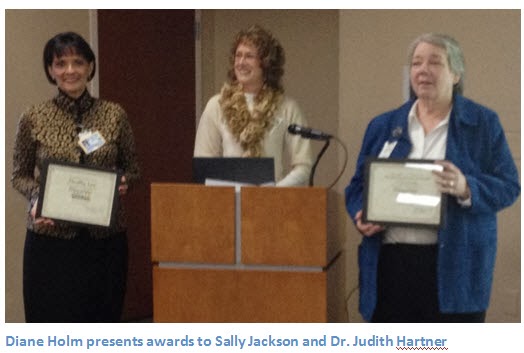 On Jan 16th, other Streets Alive! team members, themselves all participants in Lee County’s premier community health coalition – HealthyLee, presented HealthyLee representatives Dr. Judith Hartner of the Florida Department of Health in Lee County and Sally Jackson of Lee Memorial Systems with awards of recognition for the coalition’s support of this first Streets Alive! event.

Three Healthy Lee members had originally pitched the open streets idea at a coalition meeting in the summer of 2012, where Healthy Lee members unanimously voted to support it as their signature event to engage, educate and motivate the community in making healthy lifestyle changes. Health Department personnel then set about securing the initial grant used as seed money to launch StreetsAlive!

Held this past November 10th, the five hour long event drew nearly 5,000 people, who traversed the course on foot or bicycle sampling varieties of fresh foods and a myriad of activities; everything from paddle boarding to line dancing to children’s crafts.

A second Streets Alive! is planned again in downtown Fort Myers for November of this year. BikeWalkLee, which is well represented among the members of the Streets Alive! Steering and Executive committees, will be at this next event, as they were at the first, with an active community engagement booth.