TIGER/BikePed Safety:
At Friday's Lee MPO Board meeting, Don Scott, MPO executive director, brought the Board up-to-date on TIGER grant implementation and the related Bicycle Pedestrian Safety Action Plan (BPSAP) activities, as part of the monthly status report requested by the Board.  BikeWalkLee's Darla Letourneau commented on this item, first on TIGER and then on BPSAP.

TIGER
Letourneau reported to the MPO Board that the TIGER program is alive and well at the national level.  In the 2014 appropriations bill that will be enacted by this weekend, the TIGER program funding level jumped 20%--from $500 M last year (yr. we won grant) to $600 M this year.  The strong bipartisan support for this successful program is important as the Lee MPO moves forward on implementation of its $10.4 M grant.  It means our funding should be secure and that the support needed from our national and state partners in helping us implement our grant should continue.

Bike/Ped Safety
As part of the BPSAP update, Scott presented the final 2013 data and the 10-year trend line of Lee County bike/ped fatalities and injuries. 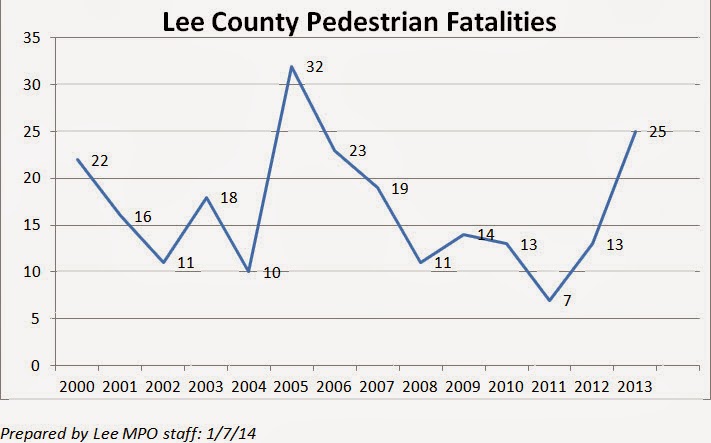 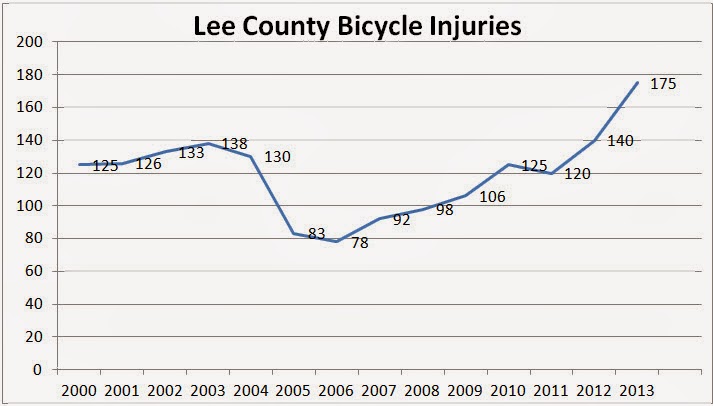 Letourneau commented on this item, stating that the county has just completed one of the worst years on record for pedestrian fatalities and bike injuries (see graphs above), and these trends must be reversed.  Our pedestrian and bike fatality rates (per 100K) are almost double the national average (see graphs below). 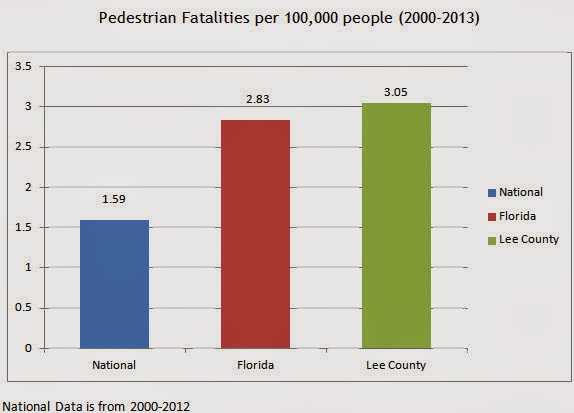 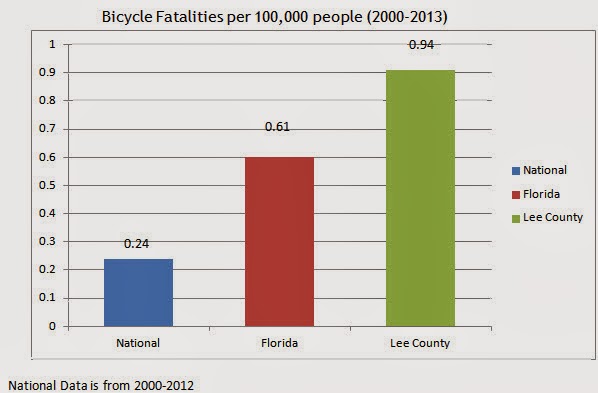 Following up on an email she distributed to MPO Board members prior to the meeting, Letourneau highlighted the launch of NYC's major multi-agency approach to reduce bike/ped fatalities.  She reported that this week the new mayor of NYC committed to eliminating traffic deaths within a decade and launched an aggressive multi-agency campaign to make it happen.  Just as in NYC, all the local jurisdictions, law enforcement officials, agencies and stakeholders must work together if Lee County is to reduce the traffic fatalities on our roads.

On a per capita basis, Lee County's pedestrian fatalities are almost double the rate of those in NYC, yet there's little sense of a community-wide crisis here. The plan laid out by Mayor de Blasio to achieve this goal illustrates the power of political leadership in tackling these problems.  Letourneau stated that we need Lee County leaders to reject the idea that traffic fatalities are inevitable, and instead, link arms and make solving this problem a top priority.  She also informed the Board about USDOT Secretary Foxx's announcement this week that bike/ped safety will be a top priority during his tenure. (also see FastLane statement)

The Bike/Ped Safety Action Plan that this Board adopted in September is a good start.  Now political leadership by all the players is needed.  Letourneau urges all the local jurisdictions to make this a top priority and to work in concert with the MPO and other partners.

Letourneau also reported on the Florida Senate Transportation Committee's action this week to raise the speed limits on Florida roads.   BikeWalkLee, along with safety advocates throughout Florida, oppose this bill because it moves in the opposite direction of making our roads safer for all users.  BikeWalkLee communicated this position to the Lee Legislative delegation in December and Letourneau asked other Lee County officials to express their opposition to the bill in their communications with the  Lee delegation.
Report by Darla Letourneau

Below are excerpts from the NYC announcement story.  Click here to read the full article
January 15, 2014: De Blasio Rolls Out a Multi-Agency Approach to Reducing Traffic Violence by Stephen Miller

Calling traffic fatalities an “epidemic” that deserves immediate attention from the city, Mayor Bill de Blasio launched his administration’s “Vision Zero” agenda this afternoon, setting out to eliminate traffic deaths within a decade. The most important news to come out of today’s announcement is that his administration will enlist multiple agencies to tackle the multifaceted problem of traffic violence. A working group led by the city’s police, transportation, health, and taxi commissioners is tasked with coming up with an action plan by February 15.

De Blasio also announced more immediate steps. School-zone speed cameras, which have been issuing warnings since they were installed in September, will begin issuing tickets tomorrow, the mayor said, and the police will begin prioritizing enforcement of the most dangerous infractions: Speeding and failure to yield to pedestrians. In addition, NYPD will be increasing the size of its highway division — which investigates crashes and performs much of the department’s traffic enforcement — to 270 officers, an increase of 50 percent; already, the unit has increased its staff size by 10 percent, up from 170 officers.

De Blasio made the announcement this afternoon at PS 152 in Woodside, where 8-year-old Noshat Nahian was walking last month when, crossing Northern Boulevard with his sister, he was struck and killed by an unlicensed tractor-trailer truck driver. Flanked by Police Commissioner Bill Bratton, incoming Transportation Commissioner Polly Trottenberg, elected officials, and families of traffic violence victims, de Blasio began his remarks by saying this issue is important to him as a parent. ”Every one of us thinks: ‘What if that was my child?’” he said. “That is, in fact, how we have to make public policy and how we have to implement public policy.”

“The families joining us today have turned their grief into action,” de Blasio continued. “We are standing with them and we’re starting immediately to make changes to protect our children, and to protect all New Yorkers.”

In tone and substance, today’s announcement marked a notable departure from the days when NYC DOT was the sole city agency taking traffic violence seriously. The interagency task force will convene over the next month before releasing a report with “concrete plans” to carry out de Blasio’s Vision Zero campaign promises, namely: Dedicating more NYPD resources to traffic enforcement, improving design and enforcement along 50 dangerous corridors and intersections annually, expanding the number of 20 mph zones, and formulating a legislative agenda that includes securing home rule over traffic enforcement cameras.

Bratton announced a raft of changes at NYPD, some of which were begun last year by his predecessor, Ray Kelly. These include expanding the Highway Division and its Collision Investigation Squad, including new staff focused on crash investigations, drug testing, and retention of “black box” data that records critical information immediately before a crash.

“Many, many serious accident investigations involving serious injuries were not adequately investigated,” Bratton said. “I intend to ensure that the new policy is adhered to strictly.”

Bratton said the department increased the number of speeding tickets it issued last year by 16 percent over the year before, and he expects the number of citations to continue to increase. Bratton also said the department is outfitting more precincts with laser speed enforcement equipment, which is more effective than traditional radar-based speed guns.
Click here to continue reading the article.