Sanibel honored as a 'Complete Streets Champion of the Year'

It was a pleasure for BikeWalkLee to present the City of Sanibel and the Sanibel Bicycle Club with a 2013 Complete Streets Champion of the Year award. 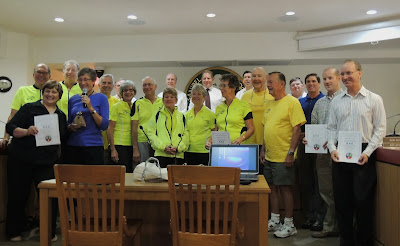 BikeWalkLee Press Release:   Dec. 3, 2013
BikeWalkLee, a local community coalition advocating for complete streets in Lee County, has selected the City of Sanibel and the Sanibel Bicycle Club (SBC) as a 2013 Complete Streets Champion of the Year for “a decade of incredible work to make Sanibel a model walkable, bikeable community.” BikeWalkLee representatives will present the award at the Dec. 3 City Council meeting.

In 2010 Sanibel was the first Southwest Florida community to be designated a “Bicycle Friendly Community” by the League of American Bicyclists, a sign of the city's commitment to a comprehensive program of engineering, education, encouragement, enforcement, and evaluation (the five Es) efforts to promote bicycling. In light of all the improvements the city has made over the past four years, the city's Bicycle Friendly Community status should be enhanced when it's up for renewal next year.

“The leadership and commitment from this City Council has been key to the progress you've made over the past six years,” said BikeWalkLee’s Darla Letourneau. “Sanibel is very lucky to have City Manager Judie Zimomra, who is such a strong champion for the shared use path system and promoting biking and walking for transportation, recreation, and health.

“BikeWalkLee is grateful to Mayor Kevin Ruane in his role as chairman of the Lee County Metropolitan Planning Organization Board for his support of a more balanced multi-modal transportation system that is safe and accessible for all users. He is providing countywide leadership at a critical time.

Continued Letourneau: “Finally, I would like to recognize the role  the Sanibel Bicycle Club played in these accomplishments, and pay special tribute to the contributions made by the late Doug Dietrich.” 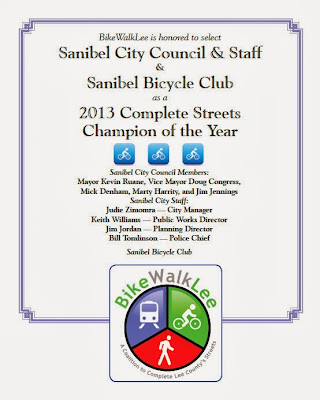 The City of Cape Coral and Cape Coral Bike Ped was also honored with the same award this year, part of BIkeWalkLee’s efforts to honor the significant advances being achieved by Lee County’s cities to make our communities more bikeable and walkable.