Cape Coral honored as a 'Complete Streets Champion of the Year'

It was a pleasure for BikeWalkLee to present to the City of Cape Coral and Cape Coral Bike-Ped a 2013 Complete Streets Champion of the Year award.

BikeWalkLee, a local community coalition advocating for complete streets in Lee County, has selected the City of Cape Coral and Cape Coral Bike-Ped (CCBP) as a 2013 Complete Streets Champion of the Year for “its innovative partnership to create a system of biking routes  in Cape Coral."BikeWalkLee representatives will present the award at the Dec. 2 City Council meeting.

“Today we are here to honor the Cape Coral City Council and staff, and the CCBP group for its innovative public/private partnership to create a safe and connected system of more than 90 miles of cycling routes within Cape Coral,” said BikeWalkLee’s Darla Letourneau.

“Carolyn Conant's leadership and vision beginning in 2011 gave birth to CCBP,” said Letourneau, “bringing together a great team of Cape Coral leaders, experts and interested citizens who wanted to improve the city.

“A year ago, CCBP came to the Cape Coral City Council to request a resolution establishing a fund-raising tool and a dedicated account for pedestrian and bicycle paths within the city, which was unanimously approved. To see the progress that has been achieved in just one year is amazing, and a real harbinger of the good things yet to come for making Cape Coral more bikeable and walkable,” said Letourneau.

“CCBP's innovative and successful efforts, the city's hands-on partnership, involvement, and support for this project, and the strong support from Cape Coral businesses and organizations, is a model for other Lee County communities to follow.” 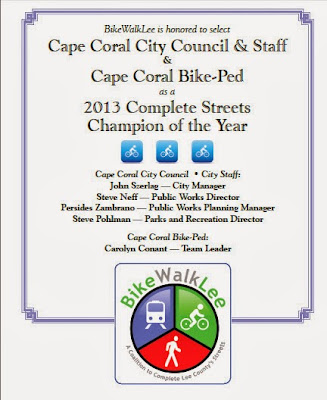 o   Team Aubuchon Route  (Signs were recently installed for this route.)
o   Cape Coral Chamber of Commerce Route
o   Physicians’ Primary Care Route
o   Cape Coral Community Foundation Route
o   CCCIA (Cape Coral Construction Industry Association) Route
o   Yacht Club Route
o   Veteran’s Route (with in-kind assistance by Lee County)
“BikeWalkLee has been working to promote more bike tourism in Lee County (one of the goals of the recently awarded TIGER grant),” said Letourneau, “and the Cape's bike route is very much a part of this strategy. We look forward to close collaboration with CCBP, the city and others to publicize these bicycle routes, bringing more tourists to the city, as well as greater awareness of these routes to locals and the cycling community within the country and around the world.”

The City of Sanibel and the Sanibel Bicycle Club was also honored with the same award this year, part of BIkeWalkLee’s efforts to honor the significant advances being achieved by Lee County’s cities to make our communities more bikeable and walkable.