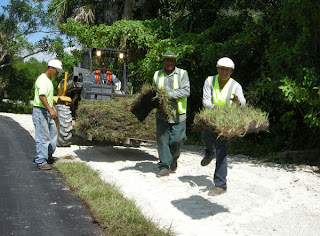 Kudos to City of Sanibel for the path system improvement projects nearing completion. Since I left in June, four major path extensions or improvements have been completed (or almost completed). What a delightful welcome back! Thanks to the City Council, the City Manager and staff, the Sanibel Bicycle Club, and the community at large that supported these investments. Darla

Judie Zimomra admitted that she had done something last Saturday that she had never done before since becoming City Manager 10 years ago.

She bicycled across Sanibel and Captiva, from end to end, exclusively using the island's system of shared use pathways.

During Tuesday's City Council meeting, work on both the Dunlop Road/Periwinkle Way and the Pine Avenue to Blind Pass Bridge extensions were brought up by several members of the audience as well as the council itself.

"I just wanted to let you know that I took the new section of shared use path to get here today and I enjoyed it very much," resident Claudia Burns said during the public comment portion of the meeting.

According to Zimomra, the Dunlop Road/Periwinkle Way extension - which begins at the crosswalk in front of St. Michael & All Angels Church, continues along Periwinkle Way across the street from Sanibel Community Park and the Sanibel Community House - now connects the pathway with some of the most frequented amenities in the center of the island, including the Herb Strauss Schoolhouse Theater, Sanibel Public Library, City Hall, BIG Arts and the Sanibel Historical Museum & Village.

She also praised the donation of the easements from property owners adjacent to both pathway extensions, including the residents of Periwinkle Pines, which came at no cost to the city.

"I love being a part of stuff that makes people happy," said council member Marty Harrity. "It's good to see what happens when we all work together for Sanibel."

Gates Castle, director of the city's Public Works Department, explained that the Dunlop Road/Periwinkle Way extension comprises 3,700 feet of new shared use pathways, constructed at a cost of $178,848. The project, which began with vegetation removal in mid-July, is expected to be completed by next week.

The Pine Avenue to Blind Pass Bridge extension, which comprises 1,000 feet of new shared use path connecting Sanibel with Captiva, is being constructed at a cost of $80,196.80. It is expected to be finished by Nov. 3.

"This is a perfect example of what can happen when we have the will and the desire to do something," added Vice Mayor Mick Denham.

Zimomra, who explained that among the work still to be performed at both sites includes grading, sodding, signage and crosswalk striping, told councilors that the city is still looking at "appropriate places to install the appropriate amenities" in areas along the pathways. Such amenities may include lighting, benches and picnic tables, although the exact details have not been made official.
Posted by Darla at 10/06/2011 04:39:00 PM