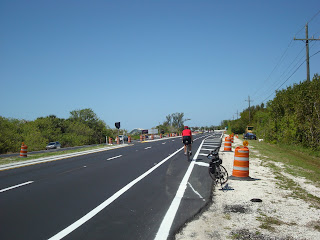 On Tuesday, News-Press had a front page story about nine major road projects under construction throughout the county. What the article didn't say was that all of these projects (except I-75 where it's illegal) have bike/ped facilities. Here's the list of what's coming soon in terms of improved bike/ped facilities...in addition to the stand-alone bike/ped projects we reported on last week:

3. The 6-laning of Colonial Blvd (target: Nov. 2011)
• Colonial will have 4 ft. on-road bike lanes (other than through the interchange area) and 8 ft. pathways on both sides of the road

6. The 6-laning of Daniels Parkway (target: Feb. 2012)
• Daniels will have on-road bike lanes that will be extended to Treeline Dr. (widening ends at Chamberlin)
• The pathway on the north side will remain