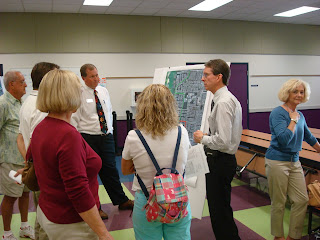 More than sixty people stopped in at the Open House held at the Oasis Middle School on October 5th. Judging by the many positive comments offered and number who filled out the short survey form, we are encouraged to think that the 1.1 mile Beach & Agualinda requests will receive a favorable recommendation at the Transportation Advisory Committee meeting later this month. Thanks to Steve Neff, Rashad Hanbali and staff for hosting the open house, BikeWalkLee volunteers, Caloosa Riders and everybody who supported this SW Cape Neighborhood Assn. bike lane request.