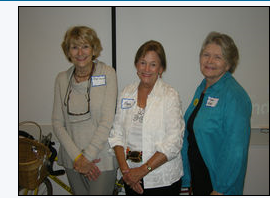 Members of the Sanibel Bicycle Club got a real treat at the club's March potluck meeting, with a program featuring the women who founded the Sanibel shared use path. Thanks to Board member Patti Sousa for organizing the wonderful event!
Island Reporter
By JEFF LYSIAK, jlysiak@breezenewspapers.com
March 24, 2011

They stood up to Lee County, and they stood in the way of commercial trucks. But there was nothing that was going to get in the way of four island women who wanted the City of Sanibel to create a system of shared use paths.

Nearly four decades later, those pioneers were finally celebrated for their efforts that has resulted in more than 23 miles of pathways, connecting the islands' main thoroughfares with side streets and high-volume points of interest used by residents, seasonal visitors and day-trippers.

Back in the early 1970's, in the days prior to the incorporation of the city, these ladies — Grace Whitehead, Mariel Goss, Starr Thomas and Sharon Vartdal — began looking for a way to establish pathways which could be enjoyed by pedestrians and bicyclists alike.

"We used to go around and collect coins," recalled Starr Thomas. "We placed collection jars all over the island, in restaurants and clothing stores."

Not too long after a bank account was established to support the concept of creating a shared use path, Thomas, named the project's treasurer, helped establish the first Sanibel Captiva Directory. She remembers having to comb through the Fort Myers Area phone book, searching for the names and addresses of island residents to include in their publication.

"The Girl Scouts used to sell them as a fundraiser," Starr added. "And as the project grew year after year, we built up advertising in the directory. That kind of stepped things up. I'd say it was a very successful project."

Whitehead, who along with her husband, Don, helped establish the Island Reporter in late 1973, was responsible for much of the early progress in having the pathway project supported by islanders and approved by city leaders. She passed away on Jan. 11, 2011.

"We were four little housewives going up against the county," said Vartdal, who recalled Whitehead as the "leader" of their cause. "We tried to do things nicely at first, but they (county officials) just laughed at us."

Vartdal remembered one incident, after failing to have the speed limit on Periwinkle Way lowered, which resulted in the pathway promoters nearly being arrested.

"We decided to stage a protest to stop traffic," said Vartdal. "We did it on a Monday morning, because that's when most of the construction vehicles would be heading onto the island. Mariel (Goss) told us how to stop them... and we did! There were no vehicles on Periwinkle from the causeway all the way up to Bailey's."

"We were fighting the good fight," she added.

Once the group had collected more than $50,000 in donations, construction on the shared use paths began.

"What I remember most about the 'Bike Path Movement' was that it took an entire community effort to get it done — both the year-rounders and the snowbirds," said Goss. "We were a bunch of 30-something women going up against these good ol' boys. And the county thought Sanibel only had the elite out here, so why should they give us any money?"