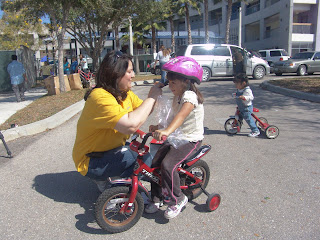 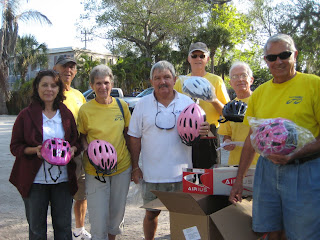 Kudos to the Sanibel Bicycle Club for implementing, for the second year in a row, a community-wide bicycle collection drive for families and children in the Immokalee community. Below is the March 2nd press release from the recipient organization, Redlands Christian Migrant Association. The story was also broadcast on NBC-2 News.

IMMOKALEE – Guadalupe Gonzalez, 4, steered her bicycle in circle after circle on the driveway of the Redlands Christian Migrant Association complex. And why not?

The pint-sized red and black Trek wasn’t new, but it was Guadalupe’s first bicycle. It even sported training wheels. Her mother smiled. “She’s happy,” she said in Spanish.

Guadalupe was among 130 people who benefited Wednesday from a unique community-to-community act of charity. Bicyclists from the affluent beach town of Sanibel Island brought a two-month collection of restored bicycles to the low-income farming hub of Immokalee. There, all bikes quickly dispersed.

RCMA, which operates childcare centers and a charter school in Immokalee, distributed many bicycles to families of the children it serves, and the rest to other local charities.

“This was really neat,” said Leslie Moguil, RCMA’s Associate Executive Director. “In Sanibel, people ride bikes for pleasure and fitness. But here, they’re an important tool of life. For people who can’t afford any form of transportation, a bicycle can be their car.”

The bicycle drive has become an annual event for the Sanibel Bicycle Club. This year, the club upgraded its preparations to include a temporary bicycle repair shop at Sanibel Congregational United Church of Christ. Billy Kirkland of Billy’s Bike Shop loaned one of his professional repair techs to the effort. Consequently, all bicycles arrived ready to ride.

Bicycle club members, most sporting yellow T-shirts, came to Immokalee with their truckloads of bicycles.