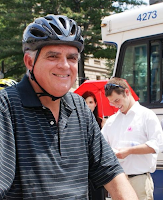 FastLane: March 04, 2011
Here's the word from U.S. Transportation Secretary Ray LaHood:
Today is Friday, March 4, and for the nation's bicycling enthusiasts that means only one thing: 4 days until the 2011 National Bike Summit. And to get the bike folks geared up for this year's gathering, on Tuesday I went on BicycleRadio.com's "Escape The Peloton" show.

As you can imagine, host Sean Mellor and I talked about a range of bicycling-related topics. From the thrill of watching my grandkids get their first bikes to the way distracted driving affects the bicycling community, we covered a lot of ground.

Click here to listen to my Bicycle Radio interview!

But I think what listeners really wanted to hear us talk about is President Obama's budget request for 2012.

We are very fortunate that, in these hard economic times, the President knows the economic importance of investing in transportation. He has proposed a 127 percent increase to fix our roads and bridges, and to build big projects that will yield economic development and jobs, like high speed rail. And don’t forget our emphasis on livable communities, so that people will have more options for getting around.

I've been to more than 100 cities in more than 40 states across this great country, and everywhere I've gone, people have said they want more ways of getting around. Often, they want to be able to leave their cars behind. This means improved transit like streetcars and buses. But it also means more opportunities--whether as a form of recreation or as a way of commuting--to walk or ride a bicycle safely. We can achieve that through off-street trails, as in the Philadelphia Area Pedestrian and Bicycle Network, or through on-street bike lanes, as along DC's own Pennsylvania Avenue.

One of the most important things to remember is this: the Department of Transportation can help set standards and support programs, but many of the best ideas have come from the grassroots. And that's where next week's summit-goers come in.

Thanks to programs like Bicycle Radio and the Outspoken Cyclist and magazines like Spokes; thanks to the President's willingness to promote bicycling; and thanks to the cycling enthusiasts who have come together in organizations like Transportation For America, America Bikes, the League of American Bicyclists, Complete Streets, and Safe Routes to School, the stars have aligned over the last two years for greater awareness of the valuable role bicycling plays in American transportation. But, as I said in January, if you want that momentum to continue, you'll have to continue that terrific grassroots work.