Updates from the Government Beat 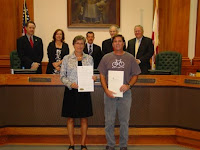 • Sanibel toll booth and access bike improvements: Over the holidays, the roadway from McGregor Blvd up to about 1 mile before the Sanibel tollbooth was repaved and the shoulders were repaved and improved, including new keyhole bike lanes. It looks good! Now, we are waiting for the tollbooth construction project to begin so the remainder of the shoulder is completed and the tollbooth fixes are done. This construction project should begin soon.
• Buckingham shoulders: Construction on this project should begin soon, if it hasn’t already started this week.
• Metro Parkway extension: The MPO’s Bicycle and Pedestrian Coordinating Committee (BPCC) has been working with the project manager on bike/ped facilities. In addition to the bike/ped path that will go the length of the project, they are going to provide bike lanes throughout the project, including solutions through the overpass and off-ramp at the south end. This project won’t be completed until 2012. Thanks to Bert Hamilton for his efforts, working with the project manager, MPO, LeeDOT, and FDOT staff, to improve the designs.
• Summerlin Road improvements: The County’s Bike/Ped Advisory Committee (BPAC) worked successfully with LeeDOT to get them to widen the planned bike lane (undesignated) from 14 ft. to 3 ft.
• Interchanges: SR 78 and I-75 interchange; and Colonial and I-75 interchange. Dan Moser raised these issues at the BPCC meeting as well as at the MPO meeting (see this week’s Florida Weekly Dan Moser column). These interchange improvement projects do not include on-road bike amenities, and the off-road accommodations are narrow concrete sidewalks. At Friday’s MPO meeting, Chairman Ray Judah asked FDOT to work to resolve these issues so that there is a connected system for cyclists and walkers. MPO staff agreed that they will be this issue back to the Board to review what accommodations can be made.

Other Government updates:
• Jobs bill (stimulus) production-ready priority project list: BikeWalkLee asked the MPO Board on 1/22 to move 4 major road projects down on the priority list so that 13 additional bike/ped projects would have a chance to be funded. As a result, the Board sent the list back to the committees with instructions to divide the list into 2—one for state project priorities and one for local priorities.

• Committee leadership: Steve Jansen, with the LeeDOTTraffic Section, is now the Chair of the MPO’s BPCC committee and Dan Moser is the vice-chair. Bert Hamilton was elected as the chair of the county’s BPAC committee. Margaret Banyan is now the co-chair of the Smart Growth Committee. Congratulations to the new leadership teams.

Thanks to BikeWalkLee steering group members who are serving on these various committees and to the other members who are attending and participating: Dan Moser, Bert Hamilton, Margaret Banyan, Steve Rodgers, and Joe Beck.
Posted by Darla at 1/29/2010 02:51:00 PM