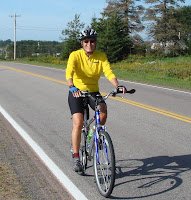 Naples Daily News
Hundreds of cyclists join annual ride to support more sidewalks, bike lanes
By SARAH DONOVAN
Sunday, January 24, 2010
Naples may not be friendly to those who pedal, but that didn’t stop about 525 bicyclists from riding all around town Sunday morning.
Despite strong winds and the League of American Bicyclists’ recent decision to deny Naples a bicycle-friendly community designation, more bicyclists than ever rolled out to the Naples Pathways Coalition’s fourth annual Pedaling for Pathways bike ride and brunch at Lowdermilk Park on Sunday....
“What Naples Pathways Coalition is trying to do is get a safe system of interconnected pathways so that people can get from one point to another without having to be in a car,” said Michelle Avola, NPC’s executive director. “Naples is just infamous for our sidewalks that end at nothing, bike lanes that end at a guard rail or just don’t continue on the other side of an intersection.”
Avola was not surprised when she found out that Naples was deemed unfriendly to bicycles."