Congratulations to the City of Bonita Springs for being in the national spotlight as one of 12 communities across the country that were singled out in Smart Growth America's new report for their exemplary Complete Streets initiatives. It is gratifying to see one of the five agencies/municipalities in Lee County that adopted complete streets policies in 2009-2015, to have on-the-ground results from their successful implementation of their complete streets policies.  We hope to see other communities in Lee County recognized for exemplary complete streets work in the future. 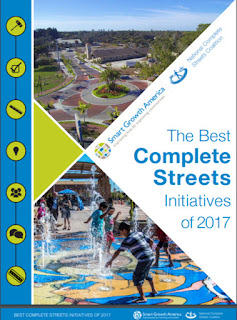 This week Smart Growth America/National Complete Streets Coalition released its new annual report: The Best Complete Streets Initiatives of 2017.  We're excited that the City of Bonita Springs was one of the 12 communities selected nationwide to feature as doing exemplary work on implementing complete streets.  The write-up on Bonita's work highlights its Downtown Improvements Project, and starts with the following statement:  "Motivated to improve accessibility and safety in its downtown area, the City of Bonita Springs, FL worked with both the community and private sector to create a more people-friendly downtown area.  Through its Downtown Improvements Project, the city created a better connected street network for people walking, biking, and taking transit.  The city also incentivized development that promotes job growth and affordable housing."  (See p. 31-33 of the report for the full Bonita Springs write-up. 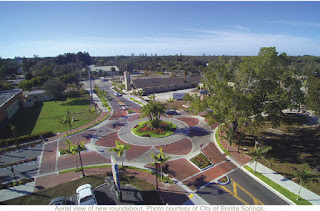 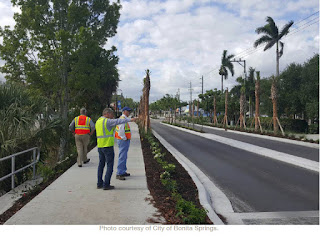 As the Director of the National Complete Streets Coalition stated in the report's introduction, "We hope that these stories will not only provide inspiration, but also spur other communities into action so that in 10 more years we are celebrating tangible and lasting changes to our streets, with the benefits extending to everyone."

Link to information on the Downtown Improvements Project, found on the City's website.