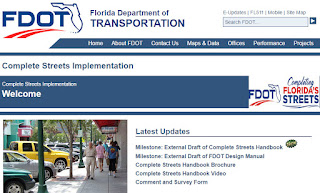 Background
Since FDOT announced its Complete Streets Policy in 2014, FDOT has worked to transform the way FDOT designs roads  and conducts business .  The goal of FDOT's Policy and Complete Streets Implementation Plan (2015) is to "provide safer, context-sensitive roads by putting the right street in the right place."  [1000 Friends of Florida 2/12/16 Webinar Description.] The highly acclaimed Implementation Plan outlines plans for updating the key manuals and guidance that FDOT engineers use to design roads.  The accompanying Complete Streets Handbook was not part of the plan, but has been developed as an interim document with guidance to FDOT and local partners. The Plan called for full implementation by the end of 2017. 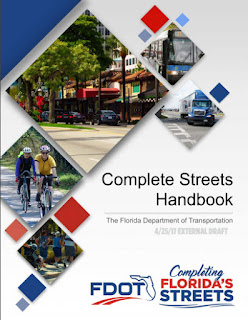 In "planners lingo", the Context Classification System generally aligns with the New Urbanist (TM) Transect System. This planning tool will evaluate land use characteristics, development patterns, and roadway connectivity to determine the context classification for each state roadway project at the front-end of the planning and project development process. 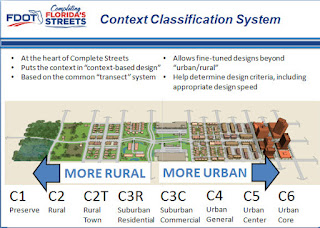 While these two important documents were developed for state engineers and planners dealing with the state roadway system, the new Context Classification System can be considered by local jurisdictions on county and local roads, and is especially appropriate for jurisdictions that have adopted complete streets policies (which includes 5 policies in Lee County).

The FDOT Context Classification System takes the complete streets holistic approach of the context of the whole area (land use as well as transportation). 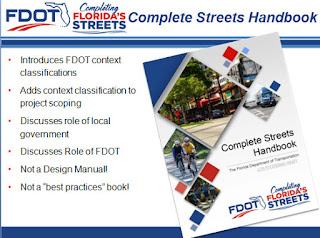 The guidance in both the Handbook and the Design Guide will be reflected in the update of the Florida Greenbook (which is a milestone in the Implementation Plan), scheduled to be undertaken in 2018.  The Florida Greenbook directly applies to local governments.  Local jurisdictions should take a close look at the Draft FDOT Design Manual and Complete Streets Handbook to better understand some of the changes coming our way.
FDOT encourages comments and questions by May 26th: submit to www.FLCOMPLETESTREETS.com.

Look for an upcoming blog from BikeWalkLee that focuses in more detail on how the guidance in both of these documents can be used to implement complete streets at the local level.
Report by Darla Letourneau
Below are links to each of the documents available:
All the documents and many other related Complete Streets Resources are available on FDOT's  website. 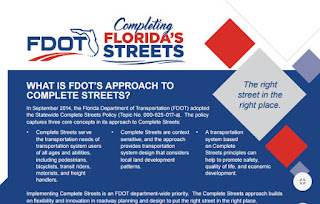 Below are links to documents and previous BikeWalkLee blogs about FDOT's Complete Streets Policy: