Cape Coral's City Council meeting on April 3rd highlighted the City's ongoing progress in implementing complete streets in the Cape.  There were three items on the agenda related to these efforts.

Second, the Council approved the City's first Bicycle and Pedestrian Master Plan.  Third, the Council approved the project design for the SE 47th Terrace Streetscape Project, which focuses on revitalizing this area by making it a "complete street", making it a safe and welcome place for pedestrians.  Kudos to the City Council, City staff, and the Cape Coral Bike-Ped group for their outstanding efforts, and to FBA for bringing statewide recognition to these local accomplishments.  Below is an article reporting on yesterday's Council actions, along with links to the Master Plan, and previous BWL blogs about these initiatives. 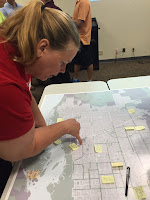 During Monday night's meeting, the city council unanimously approved the plan that will add 93 miles of sidewalks, 22 miles of multi-use paths, and 138 miles of on-street bike paths over the next 15 to 20 years.

The plan was created to provide a cycling network safe for bicyclists and pedestrians that will spread throughout the city.

The cost to construct the network is estimated at $63 million.

Alta Planning and Design, the company hired by the city to create the master plan, recommended the city seek state and federal grants, make the improvements part of the city's UEP and Road Repaving initiatives, as well as using future gas tax allocations to fund the projects. According to the firm, with those allocations, 30% of the proposed bike and pedestrian projects would be funded through Fiscal Year 2022.

The city has already utilized an over $3 million grant it received from the state to begin construction of a multi-use path along Kismet Parkway.

In related news, at the beginning of Monday's meeting, the City of Cape Coral and the Cape Coral Bike-Ped organization received the 2016 Bicycle Friendly Community Award from the Florida Bicycle Association.

The non-profit organization was created to promote bicycle safety throughout the state of Florida and annually recognizes contributions to accomplish that goal. Florida Bicycle Association President Becky Afonso was on hand at the meeting to present the city and Bike-Ped the award, and commended both for their partnership to create a network of bicycle paths in the city making it safer for both bicyclists and pedestrians.

According to the proposed design, the project will include brick paver expanded sidewalks on both sides of the road, new landscaping, custom street lighting, elimination of on-street parking, and a roundabout at the intersection of SE 47th Terrace and Vincennes Boulevard.

It has been the roundabout that has caused the most publicity since the design plans have been released, with some concerned the roundabout could cause traffic issues on the busy street.

However, city traffic engineer Bill Corbett explained during Monday's presentation that roundabouts provide a safer option for both pedestrians and drivers reducing traffic crashes by 48% than other traffic calming options on the average.

Regarding the size of the roundabout, Corbett also assured the board of commissioners that the city has enough land in the surrounding right-of-ways to accommodate for the roundabout.

In addition to the aesthetic upgrades, the project will also include water and sewer upgrades. The $1.9 million cost for those upgrades will be paid through the city's water and sewer fund. The remaining $6.6 million cost of the project will be shared by the city and CRA. Szerlag says the current plan is for the city and CRA to equally share that cost. However, as time comes closer to pay for the construction that could change depending on the financial health of both entities. Meaning if one fund has a stronger financial setting, it could cover more of the cost burden for the project.

After hearing the presentation, the commissioners unanimously voted to approve the design, and later during the regular city council meeting, council members once again unanimously approved the design moving the project to the next phase.

Szerlag says the goal is to have shovels in the ground later this year to begin the project with a projected construction timeline of nine to twelve months to complete.