Kudos to the Councils of the Village of Estero and the City of Bonita Springs for holding a joint workshop on the FDOT SUNTrail program and how the two communities can work together as a team on a proposal for a trail on the railroad
right-of-way between the two municipalities.  Thanks to Dale Allen, the Executive Director of the FL Greenways and Trails Foundation for his inspiring presentation, along with an excellent presentation by the Lee MPO's Executive Director Don Scott. We hope you'll take the time to look at the PowerPoints presentations linked below, and also watch the video of the workshop. (Click here for meeting video).  Click here for the excellent PowerPoint Presentation by Dale Allen; and here for Don Scott's Presentation.)

Village of Estero Mayor Nick Batos and Bonita Springs Mayor Peter Simmons
The Village of Estero Council met for the first time with the Bonita Springs City Council in a joint public workshop on Tuesday, February 28, 2017.
All agreed this was the first of more workshops to be held in the future as both communities will gain by working together as a team on specific regional projects.
This workshop provided an opportunity for the two councils to meet together and learn about the Florida Department of Transportation’s SUN Trail Program.
The Shared Use Nonmotorized (SUN) Trail Program is a state-wide network of corridors physically separated from cars to safely serve bicyclists and pedestrians.  Locally, there is a proposal to run a path along a 9.3 mile railroad right-of-way that goes through both Estero and Bonita Springs.  Other paths will also be considered.
Dale Allen, Executive Director, Florida Greenways and Trails Foundation gave a presentation on the overall Florida SUN Trail system.  The goal of the program is to have a statewide system of trails and greenways that are 1) safe 2) scenic and shady and 3) connected to special places such as parks and beaches.  These trails also promote tourism to the adjacent communities. (Click here for the excellent PowerPoint Presentation by Dale Allen.)
Don Scott, Executive Director, Lee County Metropolitan Planning Organization (MPO), gave an overview of the SUN Trail system from the MPO’s perspective.  (Click here for Don Scott's Presentation.)
Both councils agreed the workshop was beneficial and plan to conduct similar joint workshops in the future. 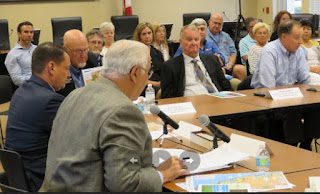