If you live, work, or play in Lehigh and support the proposed 5.5 mile pathway that will connect Lehigh Acres Trailhead Park, to the Lehigh Acres Community Park and the Harnes Marsh, allowing residents and visitors to bike or walk between these popular destinations, now is the time to make your voices heard. You are asked to sign a petition in support of the proposed project that will be transmitted to FDOT. Come out to the Lehigh Spring Festival March 10-19 to sign the petition, or read about how else you can sign on in support of this project. 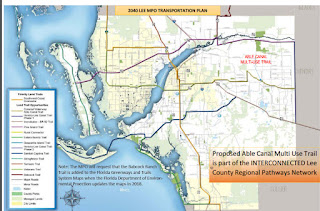 History
The Lehigh Acres community, a sporadically developed 94-square miles area in the eastern part of unincorporated Lee County, is an underserved area for walking and biking accommodations and parks. Starting in 2008, the Lee County Parks and Recreation Department purchased on abandoned golf course and turned it into the Lehigh Acres Trailhead Park, which opened at the end of 2013.  This Trailhead Park includes a half-mile paved multi-use trail that encircles a 3-acre replicated prairie. From the beginning, the County planned for this facility to function as a trailhead for a greenway corridor along Able Canal, with the first section of the greenway to connect Lehigh Acres Trailhead Park to Lehigh Acres Community Park and Harnes Marsh. 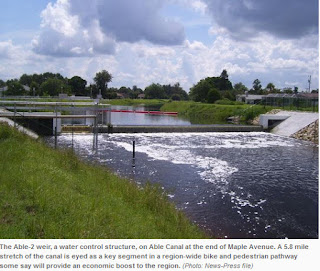 This plan was reflected in the County's Greenways and Trails Master Plan, which envisions a multi-purpose recreational trail system on the Able Canal right-of-way.  A portion of the County's Greenways Master Plan has now become part of the statewide SUN Trail system's planned Gulf Coast Trail. In 2013, FDOT funded a study of the proposed Able Canal Pathway, which is a 5.5-mile shared-use pathway proposed to run along the Able Canal right-of-way.  (See FDOT project description.)

The FDOT project development and environmental study currently underway is scheduled to be completed by May 2018.  After the study is completed, the Lee MPO will consider requesting FDOT to fund the design and construction of the facility.  One factor that FDOT considers in determining whether to move forward with a state-funded project is whether it is supported by the community.  A new Lehigh group has formed --Able Canal Trail Ambassadors--which is gathering signatures on a petition in support of this project. 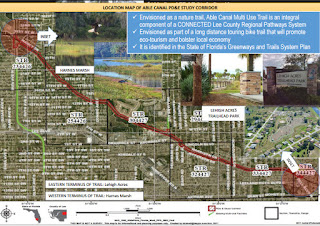 Project Description
The long term plan is for this 5.5 mile pathway to connect to the Gulf Coast Trail that will create a connected trail from Collier County in the south to Tampa Bay in the north that will bring bike tourism and its positive economic benefits to Lehigh, Lee County, and all of SWFL.
In addition to serving as a recreation opportunity, it will provide a critical connection between nearby residential areas and parks. Other amenities being considered are wayfinding signage, information kiosks, boardwalks and pedestrian bridges.

FDOT held a public kickoff meeting for the study on Dec. 15, 2016.  Those with concerns about the proposed pathway were the most vocal at the meeting, leaving the erroneous impression that the Lehigh community opposed the project. *

At the FDOT kickoff meeting, some residents who live close to the canal expressed fears that the proposed pathway could hurt property values and compromise safety.  These are common concerns expressed whenever trails are proposed in a community, but both concerns have been proven to be wrong by documented research on trails that have been constructed throughout the country.
Here are the facts:
1.  Crime:  Many adjacent landowners assume crime will go up if a trail is built.  In fact, those fears are unfounded.  As the Chief of Police said in one community: "..The trail has not caused any increase in the amount of crimes reported...We have found that the trail brings in so many people that it has actually led to a decrease in problems we formally encountered..."

2.  Property Values: Many adjacent landowners assume property values will go down if a trail is built.  In fact, the exact opposite is true. Homes near pathways and trails have an increased value of roughly $5,000 per home.  Paths are also smart economic bets because they attract millennials who want to live in walkable/bikeable communities.

3.  Opposition Turns to Support when Pathways Completed: Experience from communities across the country that have already put in trails demonstrates that most of the landowners who originally opposed the trail, become supporters and champions of the trail after it is completed, as they see the economic and quality of life benefits that they experience as a result of the trail. 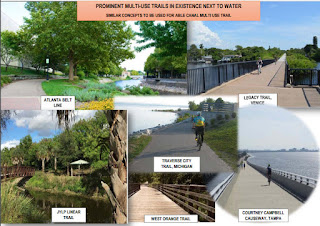 
After the Jan. 10th article appeared in News-Press,  Lehigh residents in support of the project  organized a group called the Abel Canal Trail Ambassadors to demonstrate the community's support for the project.  As a first step in the process, the group is circulating a petition in support of the project throughout Lehigh  which will be presented to FDOT.   The kick-off to the petition drive will take place at the Lehigh Spring Festival March 10-19 at Veterans Park, 55 Homestead South, Lehigh Acres.   Look for the Kiwanis booth and a BikeWalkLee banner (see photo below) and stop by to sign the petition.
Other groups in Lehigh will be circulating the petition for signature, and if you'd like to circulate one in your neighborhood or organization, click here for the link to a petition form for you to use.
If you live, work, or play in Lehigh, and can't attend the Festival, there are several other ways to sign on.

1. Print out the petition form, sign it and email it back to Robert Leap:  rjleap@yahoo.com.


2.  Or you could write a personal email to Steve Walls (FDOT District 1, Fort Myers area Director expressing your support for the project: steve.walls@fdot.fl.us


Thanks to Robert Leap for organizing this effort.  For further information, contact him at:  rjleap@yahoo.com, or 814-279-8139. 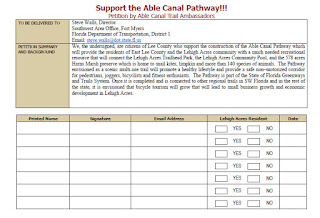 PETITION IN SUPPORT OF ABLE CANAL TRAIL
We the undersigned support the construction of the Able Canal Pathway which will provide the residents of East Lee County and the Lehigh Acres community with a much needed recreational resource  that will connect the Lehigh Acres Trailhead Park, the Lehigh Acres Community Pool, and the 578 acres Harnes Marsh preserve which is home to snail kites, limpkin and more than 140 species of animals.  The Pathway envisioned as a multi-use scenic trail will promote a healthy lifestyle and provide a safe non – motorized corridor for pedestrians, joggers, bicyclists and fitness enthusiasts. The Pathway is part of the State of Florida Greenways and Trails System. Once it is completed and is connected to other regional trails in SW Florida and in the rest of the state, it is envisioned that bicycle tourism will grow that will lead to small business growth and economic development in Lehigh Acres.


Other ways to show support:

· Write a letter to the editor (mailbag@news-press.com)
· Write your County Commissioners (Commissioner Mann represents District 5 (where Lehigh is located): dist5@leegov.com, 239-533-2225)
· Attend the next FDOT public meeting on the project. (No date yet)

BikeWalkLee will provide information about the next public meeting as soon as it is available.

Links to learn more about the benefits of Trails:


More resources on the benefits of trails available from the national Rails to Trails Conservancy.
Also see the Florida Greenways and Trails Foundation website.