BikeWalkLee views this report as a call to action for all Lee County jurisdictions, agencies, stakeholders and citizens.  Below you will find BikeWalkLee's statement in response to the report, which includes our suggested path to success, with specific suggestions for each agency and jurisdictions--MPO, County Commission, each of the 6 municipalities, FDOT, as well as the State Legislature. [Link to BikeWalkLee full statement.]

Note: At the end of this post, there is a list of links to related statements, media coverage, etc. The list is being updated on an ongoing basis, so check back to see what's the latest--last updated on 1/26/17.
BikeWalkLee Statement
Jan. 10, 2017

The “Dangerous by Design” 2016 report, released by Smart Growth America on Jan. 10, 2017, is the fourth edition of the national bi-annual pedestrian safety report which ranks the 104 largest metro areas in the U.S. (as well as all the states) by a Pedestrian Danger Index. [Link to Dangerous by Design 2016 report--full report]
This year's report ranks the Cape Coral/Fort Myers metro area (Lee County) as the deadliest metro area in the country for pedestrians.  This is a clarion call to action for all Lee County jurisdictions, agencies, stakeholders and citizens. 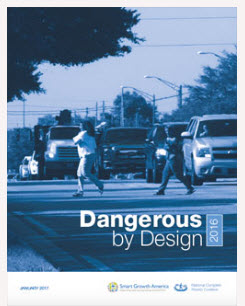 For more than a decade, Lee County has consistently ranked as one of the most dangerous areas for pedestrians and cyclists both in Florida and nationwide, and Florida has ranked the most dangerous state in the country. This report takes it to the next level by ranking our community as the worst in the country, with Florida continuing as the worst state in the country. It is important to note that this report is a look backwards (2005-2014), assessing pedestrian deaths in those years. It does not take into account recent efforts throughout Lee County to improve pedestrian and bicycle safety.

It does, however, provide a clear-cut justification for the many efforts to improve pedestrian and cyclist safety in Lee County over the past seven years, as complete streets policies were adopted throughout the county. Many improvements have been made since the timeframe covered by this report, as detailed in the Lee County Metropolitan Planning Organization’s (MPO) response to this report.  [Link to MPO press release and background materials in response to 2016 report.]

The report clearly demonstrates the urgent need for increased public and private investment in pedestrian and cyclist infrastructure to make Lee County roadways safer for all users. The policies are in place, and the plans are ready to go. What is needed now by all municipalities, the county, and the state is implementation --  the investment of adequate funding detailed in these plans.  It cannot be business as usual -- safety improvements need to be on the ground as quickly as possible.

The stigma of being ranked and perceived as the most dangerous metro area in the country for pedestrians hurts every jurisdiction and entity in the county.  All jurisdictions must be united in their commitment to make real progress toward safety by the time the next “Dangerous by Design” report is issued in 2019.

A chronic culture of danger for area walkers and bikers threatens not only residents and visitors; it undercuts our economy; threatens our ability to attract and retain businesses, workers, and families to live and work here; undermines our tourism marketing; and underlines a growing safety gap driven by socioeconomic conditions and geographic patterns.

Investments in complete streets and bike/ped strategies not only make our streets safer for all users (including motorists), they make good economic sense.  Today, more and more people want to live and work in walkable communities, yet Lee County lags far behind in offering them. We know from research that sidewalks and shared use paths increase the value of homes in those neighborhoods. Bottom line:  Investing in creating and maintaining walkable communities is a win/win strategy.

It's also time for Lee County jurisdictions to focus on equity. Our most economically disadvantaged communities are the ones suffering the disproportionate share of pedestrian and bicyclist fatalities, yet investments don't match the documented dangers. For example, much work has been done over the past five years with the Tice community with thorough identification of problems and community-supported recommendations to policymakers.  However, to date, only small efforts have been taken by policymakers to implement and fund the changes requested by the community and needed to make this vulnerable community safer for walkers and cyclists.

This national report comes at an opportune moment for Lee County. The $10 million federal investment (TIGER grant) in the Lee MPO's Complete Streets Initiative project has just been completed, with 13 miles of additional walking/ biking infrastructure connected to our existing network.  In addition, Cape Coral has just been awarded almost $6 million in state funds to begin constructing shared use paths and sidewalks on Kismet Parkway.  This path will eventually connect with and be part of the statewide trail system.

Now is the time for local jurisdictions to commit funding to build on these substantial federal and state investments in our community.  Local jurisdictions need to invest in further improvements that will meet the complete streets goals these projects support -- to reduce bike/ped fatalities and injuries, increase usage of the bike/ped facilities, grow bike tourism, and increase the economic benefits to the community.

We cannot stand still. We either move forward to make our infrastructure safer for bikers and walkers, or accept higher pedestrian and cyclist death rates as more citizens move here, and then suffer a subsequent economic downturn when people begin to realize their quality of life is slipping because investments have not been made to make our roadways safer for everyone.  Now is the time to embrace change by funding a safer future.

We must all work to make our roadways safer, as drivers and pedestrians, officials and advocates. We should not tolerate being dubbed the worst in the country in any criteria – certainly not in something as essential to one’s quality of life as safety.

BikeWalkLee calls on all local jurisdictions, the Lee MPO, Florida Dept. of Transportation, and the Lee Legislative Delegation to act now to make pedestrian and bicyclist safety a top priority and to make the necessary investments to have safety improvements on the ground as soon as possible.  The stakes are high and the collective actions by all jurisdictions must be commensurate with the stakes.

BikeWalkLee’s suggested path to success is outlined in the attachment to this statement. [Link to BikeWalkLee full statement.]
Related Links:

1/13/17: Why Does Florida Have America's Most Lethal Roads? by Laura Bliss, CityLab

MPO press release and background materials in response to 2016 report