Billy Hattaway honored as 2016 Complete Streets Champion of the Year

On Jan. 27th, representatives from BikeWalkLee (Darla Letourneau and Margaret Banyan) traveled to Orlando to present Billy Hattaway with BikeWalkLee's 2016 Complete Streets Champion of the Year award.  BikeWalkLee, along with the larger transportation world in SWFL, owes a great debt of gratitude to Billy for his tireless leadership and assistance in support of complete streets.

BikeWalkLee, a local community coalition advocating for complete streets in Lee County Florida, has selected Billy Hattaway, Florida Dept. of Transportation's (FDOT) District 1 Secretary (2011-2016) as the 2016 Complete Streets Champion of the Year for his visionary and passionate statewide and local leadership in support of complete streets and pedestrian and bicycle safety.

“Today we honor Billy Hattaway as an outstanding champion of complete streets and pedestrian and bicycle safety throughout Florida, and specifically in Lee County, over the past decade," said BikeWalkLee’s Darla Letourneau.

"Hattaway also initiated transformative change in FDOT’s design and operation of roads, shifting the focus from a car-centric culture to meeting the needs of all roadway users in a context-sensitive way. His six-year tenure as District 1 Secretary, along with his statewide leadership of FDOT's bike/ped safety campaign and its Complete Streets Implementation Plan, and his commitment to a balanced multi-modal transportation throughout his career, leaves a lasting legacy for the current and future generations of Floridians, county and city officials, local agencies, advocates, as well as the department itself," said Letourneau.

Southwest Florida has benefited from having a nationally renowned leader of Secretary Hattaway's commitment and caliber assisting its communities over the past six years as they strive to implement complete streets and a more balanced multi-modal transportation system that is safe for all users.  Hattaway’s willingness to assist in any way he was asked, both publicly and behind the scenes, has made a difference to the citizens of Lee County today and well into the future when some of these new transportation approaches will come to fruition.

BikeWalkLee is grateful for its long-term partnership with Secretary Hattaway on many bike/ped safety and complete streets initiatives over the past nine years, first as a consultant on the Lee Metropolitan Planning Organization's first ever countywide bike/ped master plan, and then during his six-year tenure at FDOT.  Since BikeWalkLee's inception in 2009, he has supported our advocacy efforts and included us as full partners with a seat at the table.  His hands-on participation in local complete streets efforts, bike/ped safety campaign and events in Lee County,  the Tice Community walking audit project,  the Lee MPO TIGER grant, promotion and support for modern roundabouts, among many other activities, was instrumental in creating momentum for trying innovative approaches in jurisdictions throughout SWFL.

He has exposed local leaders to innovative treatments such as roundabouts and road diets, context-sensitive complete streets, traditional neighborhood development, and the integration of land use and transportation planning.  He also helped local officials, staff and community leaders navigate the paradigm shift that is occurring in the transportation world.

Secretary Hattaway inspired and motivated many agencies, individuals, and organizations throughout Southwest Florida and statewide to become champions of complete streets and livable communities, resulting in an expanded local bench of champions that can carry the torch forward, another of his lasting legacies. 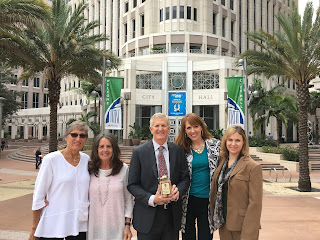 Secretary Hattaway left FDOT at the end of November 2016 to become the Director of Transportation for the city of Orlando.  While his FDOT leadership will be greatly missed, we are confident that the Complete Streets Implementation Plan for FDOT he launched in 2014 will meet its completion date of February 2018,  integrating a complete streets approach into the fiber of FDOT's policies, guidances, and way of doing business, thus institutionalizing the many changes he undertook during his tenure.

"BikeWalkLee is deeply grateful to Secretary Hattaway for his many contributions to the complete streets movement across the country, throughout Florida, and especially in Southwest Florida,” said Letourneau.  “The city of Orlando is lucky to have Billy as its Transportation Director, and we are confident that his contributions to the complete streets movement will continue in his new post."
# # #

BikeWalkLee is a community coalition raising public awareness and advocating for complete streets in Lee County—streets that are designed, built, operated and maintained for safe and convenient travel for all users: pedestrians, bicyclists, motorists, and transit riders of all ages and abilities. Other information, statistics and background is available online at www.BikeWalkLee.org. Also see our blog at http://bikewalklee.blogspot.com, and look for us on Facebook & Twitter.