Kudos to the Cape Coral City Council that voted (8-0 on Dec. 7th to approve the one-milelink on Cape Coral Parkway, Agualinda Blvd west to Sands Blvd.  Public Works crew expects to have work done by end of year.  The new bike lanes will connect with two existing routes and improve safer access to schools on Oasis Blvd.  At Monday's Council meeting Carolyn Conant of CCBP urged adoption and thanked the Council for its continuing support of bicycle-pedestrian actions helping to make Cape Coral a Bicycle Friendly City. 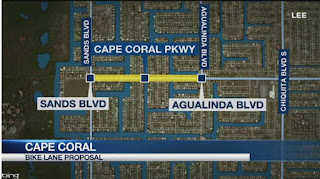 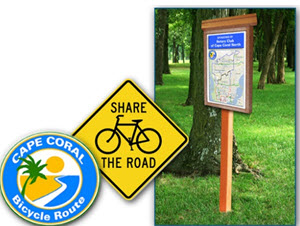 -A stretch of a busy Cape Coral roadway is about to get smaller as Cape Coral Parkway between Sands and Agualinda Boulevards will be narrowed to one lane to make room for bike lanes.

It's a routine that's hard to break for Jim Blossom and his wife as they try to get out on their bikes as often as possible.

"We like the exercise. We like driving around and seeing what's going on in the neighborhood," said Jim Blossom.

And Cape Coral is making it safer for him and other cyclists. Neighbors asked the city to create bike lanes along Cape Coral Parkway from Sands to Agualinda Boulevards. It will ultimately connect two major bike paths.

"It also means you'll link up with Oasis Middle Elementary and High for students and part of what we want is safety," said Blossom.

Carolyn Conant with the Cape Coral Bike Ped group helped propel the project. She's helped link more than 90 miles of bike lanes across the city since 2014.

The city studied traffic patterns along this mile-long stretch and found 4,000 cars pass through daily. At its highest peak, there were about 430 per hour.

But with new construction popping up, Mike Alvaro worries about the traffic.

"That's just additional traffic on this stretch. Now it could be done, but I think they have to study the pattern once those homes are in," said Alvaro, Cape resident of five years.

But the city expects even after those new homes go up, it shouldn't be a problem.

It's nice to have a little stretch there to ride your bikes and hopefully people are more aware of it.