There's an important public meeting in Fort Myers on Thursday, Dec. 3rd (5-7 p.m.) about upcoming improvements along a 2-mile stretch of McGregor Blvd.  As Councilman Flanders notes below, this is an opportune time to communicate with the City about the need to incorporate plans for speed control, traffic calming, and safe pedestrian crossings as part of this project. 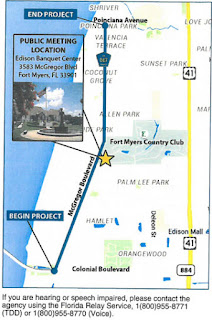 RE:   McGregor Boulevard Repair and Resurfacing

Though funds are specifically for repair and resurfacing, it will be the opportune time to design and implement the City’s long range adopted plans for speed control, traffic calming, and “safe” pedestrian crossings.  In addition, it may be the only time in the next 30 years to address questions about how we should plan, design, and construct for multimodal transportation on a historic boulevard which is 85% bordered by single family residential property.  I have bee3n told that construction work beyond “repair & resurfacing” would have to be an additional cost paid by the City.

Please read the attached flyer and make an effort to attend this important public information meeting at Fort Myers Country Club hosted by FDOT and the City of Fort Myers.  The meeting is Thursday, December 3, from 5pm to 7pm.