Join the family fun on Friday evening...be part of the May Day Critical Mass ride in Fort Myers.
News-Press, April 30, 2015 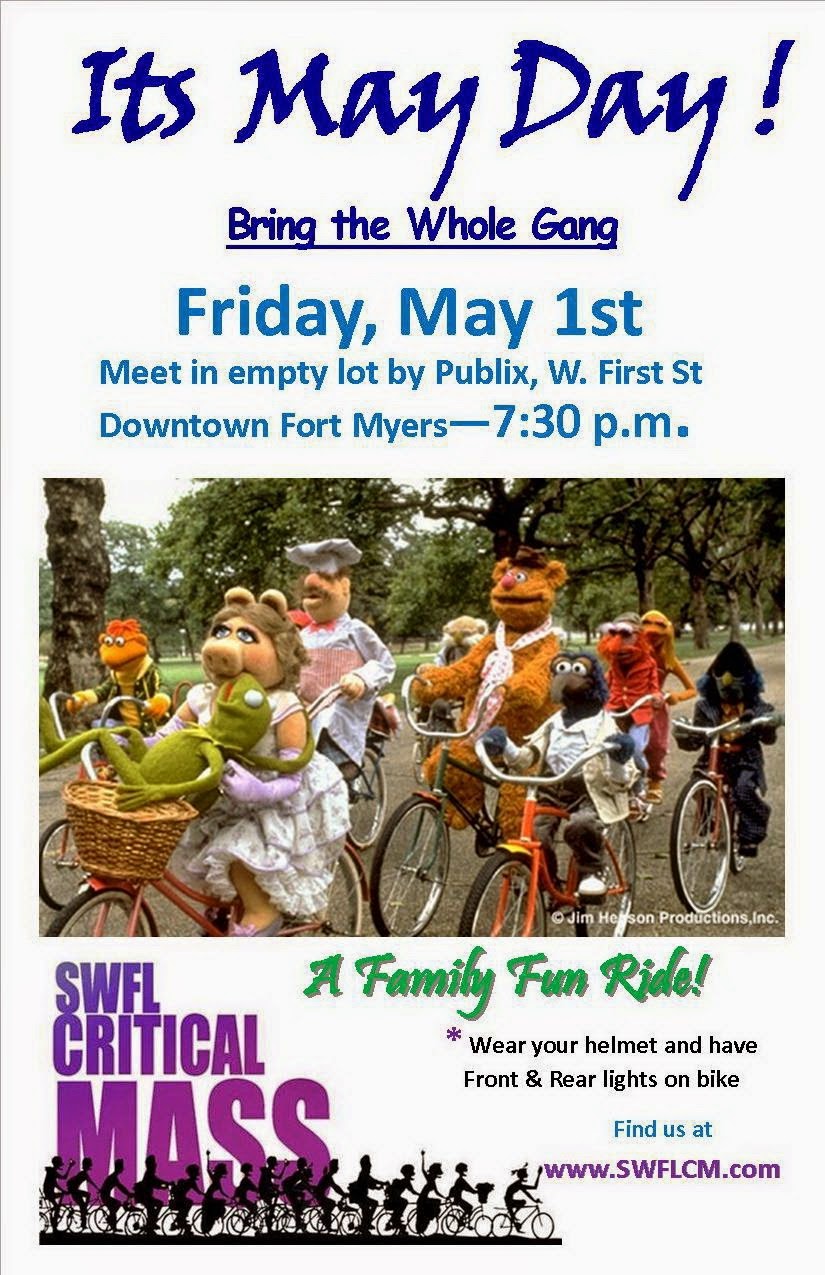 “It was like a rolling clown show. Everyone was laughing and having a great time. People wore funny outfits. My husband Bob and I were enchanted by it.”

Now they’re part of it.

Pierce, 63, and her husband were among the 140 riders who took part in the leisurely, 12-mile April ride through Fort Myers.
Held on the first Friday of every month, SWFL Critical Mass’ next race is on Friday. Riders bike for about 90 minutes, taking a break at Edison Restaurant. They’ll start and finish at the empty lot at the corner of Victoria Avenue and McGregor Boulevard across from Publix.

Councilman Forrest Banks has challenged the group to reach 300 riders to prove its legitimacy.
Banks said members have asked him for some things — including a dedicated bike-path plan — but he said, “Gee you know, there’s got to be more (riders) than in the past. You can’t change society for 50 people. It doesn’t fly too well with the rest of ‘em.

Founder Rob Siebert said he’s not sure 300 riders can be reached this time. “All I can do is give a shout out and talk to friends,” he said. “It’s growing quite a bit.”

Siebert introduced Critical Mass to this area in August, 2013. While it’s a world-wide group dedicated to awareness, respect and consideration toward cyclists, skaters, rollerbladers and any other form of non-motorist transportation, he said none are affiliated other than by the name.

“I like to bring people together,” he said. “We’re continuing to grow but more important is how safely we do it.

With the number of bikers injured on the roads in the last couple of years, he feels this group is even more important.

While people ages 6 — if they can a bike — to 80 are welcome, a lot of families have taken to this event.

Jenn Duffala Hagen, who rides with husband Matt and sons Reed, 4, and Bryce 14, said she’s found a family activity that both her boys enjoy. Reed, who is pulled on a bike trailer, constantly asks his mom when they’re going on the bike parade.

“We are recreational cyclists and love all aspects of cycling,” Hagen said. “Riding is a life-long sport. We also like the sense of community and healthy living.

“Critical Mass became our thing. We’re always looking for different ways to be seen on bikes. Sometimes they have a theme. People have dressed as Muppets, 70s was April, in February it was tweed and for the Christmas holidays, we had a wedding.”

Siebert asks that people not bring political signs to the ride.

“I tell people I don’t care if you’re purple, white or black,” he said. “Drop your work worries. It’s your most fun and least expensive.”

Friday’s race also will honor John James ‘Sugar’ Donaldson, who donated his time for graphics, photography and social media. Donaldson died after donating his kidney to his father.

“What a phenomenal guy” Siebert said. “He lost a dear friend of the group. We created a big card for his dad.

“It’s a bright, energetic group. We look out for each other.”

SWFL Critical Mass Ride
When: First Friday of every month, 7:30 p.m. May 1
Where: Empty lot at corner of Victoria Ave and McGregor Boulevard, across from Publix
Who: Riders of all ages. Families encouraged

What is SWFL Critical Mass?
•Critical Mass is a worldwide movement of awareness, respect and consideration towards cyclists, skaters, rollerbladers and any other form of non-motorist transportation. The Southwest Florida bike ride held the first Friday of every month is internationally recognized and is a community effort to help share the road.