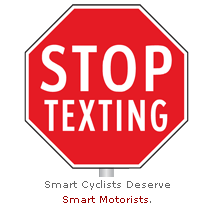 BikeWalkLee's top legislative priority for the Florida Legislature this session is to enact legislation to ban texting while driving. News-Press covered and story this week and wrote a 3/3/ editorial in support of a ban on texting while driving and making it a primary offense--a change from their previous position.  We're hopeful that this year they might actually take action!  Check out the details on the 7 bills that have been introduced.


Excerpts from 3/3 editorial:  Texting while driving
There are currently seven bills floating through the Florida Legislature — two are co-sponsored by Sen. Lizbeth Benacquisto, R-Fort Myers, and Sen. Garrett Richter, R-Naples — that in various forms ban texting while driving.

We encourage any legislation that eliminates distractions for drivers. Our concern with the texting bills is not only the number of them, but also that each addresses the issues in different ways. There does not seem to be any uniformity other than getting control of accidents caused by distracted drivers. Some bills call for only a ban on texting, others call for banning the use of a cellphone completely while driving.

Richter told The News-Press editorial board on Thursday that law enforcement officials who use their computers regularly to keep track of road accidents and crime situations also should be banned from the practice, while at least one bill says those officials would be exempt.

We caution legislators to be careful with any legislation that might make law enforcement officials exempt since their computers are their only access in life-or-death situations. There need to be some exemptions to any texting ban and we believe this should be one of them.

There also is difficulty in tracking whether texting is the reason for an accident resulting in death or injury. According to a 2011 report by the Florida Department of Highway Safety and Motor Vehicles, 25,000 drivers who were in accidents reported they were distracted, but only 180 reported they were texting. It is difficult to make a case when you are relying on the usually-flawed honor system of asking people admit guilt and not on documented evidence. According to various federal transportation reports, about 6,000 deaths can be blamed each year to distracted drivers, but how many of those involve texting is hard to determine. Some reports indicated bans on texting in several states have not reduced the number of road fatalities. Other reports, especially in New Jersey and New York, say texting while driving has dropped over 30 percent in the last several years.

If only a deterrent to the practice, a texting ban but not necessarily on the use of a cellphone makes sense. Fatalities are on the rise in this country, including 10 in Cape Coral so far this year, and although research is limited, you can make an educated guess that texting is somewhat to blame. We fully expect Florida to join 39 other states with similar laws. But enforcing such a law also is an issue. The bills only call for a driver to be cited if they are pulled over for another reason. We encourage debate on making the law a primary offense as is the case in 25 states.

We understand that before session ends a texting bill will probably make it to the governor’s desk, and if signed, will go into law at some point this year. We can only recommend that it is clear in its language, enforceable and will actually cut down on accidents, especially those that take lives.


Click here to read the News-Press: 3/1/13 article on texting while driving