This partnership with the city of Cape Coral aims to make a difference in the way the city improves and builds bike lanes, paths and sidewalks. It is a long-term commitment because achieving the group’s goals will require ongoing support from a variety of interests. CCBP volunteers met monthly for more than a year, and hundreds of hours and a substantial amount of in-kind contributions helped to launch this effort.


The CCBP strategy is:
• To identify phased improvement and routes to create a citywide bike/ped network.
• To mark the routes with standardized signage and pavement markings.
• To improve critical areas where potential problems may exist.
• To publicize the routes through a website and elsewhere.


To learn about upcoming CCBP events, see current bike infrastructure/routes and explore how businesses and individuals can support this effort, go to www.capecoralbikeped.org It shares common goals with BikeWalkLee and the Metropolitan Planning Organization, including making Lee County one of the safest (instead of one of the most dangerous) places in Florida for bicyclists and pedestrians.
Sidewalks on Savona: Safer route to school 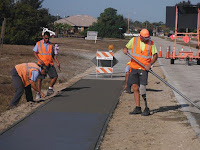 New sidewalks on both sides of Savona Parkway between Chiquita Boulevard and Agualinda Boulevard will be completed by mid-May. This is very good news since the entrance to Gulf Middle School is just one block north of the mid-point of the new sidewalks. Until now, students and others walking here had to be in the median or along the roadway and were at risk. A city crew from Public Works is doing the job using federal grant funds from the “Safe Routes to School” program totaling $245,074.


Improved crosswalk signals on the way

More bicycle- and pedestrian-friendly "walk/don't walk" traffic signals are coming to Cape Coral. The city's Traffic Engineering Department has received the new "countdown” pedestrian signal heads, which will be installed as part of scheduled inspection and maintenance of equipment at signalized intersections.

The "countdown" pedestrian signal has a numeric display showing seconds remaining to cross the intersection. An audible feature is also available for the visually impaired.  Many find the existing “walk/don't walk” hand signal display confusing. With the new signals, the guessing game is over: You know exactly how many seconds remain to cross or wait for the next cycle. Examples of the new pedestrian signals can be found on Cape Coral Parkway/10th Place, and at the Del Prado entrance to Coralwood Mall. 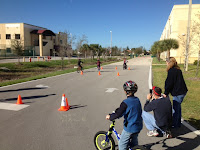