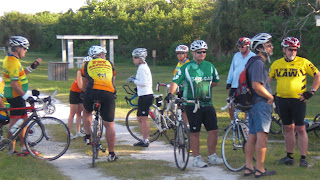 30 cyclists participated in the “Bike Ride to Celebrate the Completion of the Hickory Blvd Shoulders” on Sunday morning, August 28th.  Most of the riders, including a contingent of riders from the Bonita Bay Bicycle Club, rode north from the starting point at Lover’s Key State Park to the first turnaround at Bowditch Point.  They then continued south two miles on Little Hickory Island where the road resurfacing and addition of shoulders has been recently completed by LeeDOT.  A final turnaround at Bonita Beach took the riders back to the starting point for a total of 27 miles.

The ride was the vision of the BikeWalkLee steering committee to invite the general public as well as our civic leaders, the public, LeeDOT staff, engineers and planners, anyone else responsible to participate in a bike ride to experience the difference that a project like this makes.  The road on Little Hickory Island had been a two-lane road, forcing bike riders to ride in the traffic lanes – now with the addition of the shoulders this is a much safer place to ride a bike.  Traffic also flows with little restriction.  The end result is a win-win for both modes of travel.

The Caloosa Riders Bicycle Club assisted with the route details and ride leadership.  Their regular ride scheduled in Cape Coral was re-directed to this location for the day.  Several of the participants had not ridden on the beaches for quite some time and found the Hickory Blvd. shoulders and resurfacing in the Ft. Myers Beach areas to be a welcome addition, improving the ride experience and safety substantially.  The recently completed north end of Estero Blvd from the Times Square area to Bowditch Point was also enjoyed by the cyclists. That renovation includes sidewalks, continuous drains, marked bicycle lanes, paver crosswalks and a resurfaced roadway. 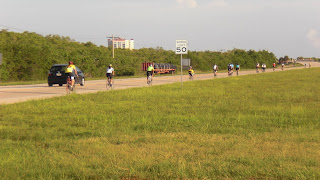 Kudos to LeeDOT who did a great job planning and executing the Hickory Shoulders Project.  BikeWalkLee, the Caloosa Riders, and the Bonita Bay Bicycle Club in particular are most appreciative of their efforts and of the support of the County Commissioners and the Bonita Springs City Council that made this project possible.