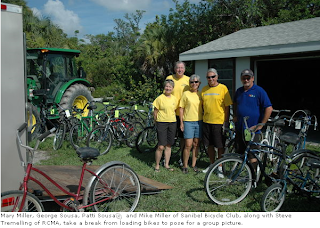 Kudos to the City of Sanibel and the Sanibel Bicycle Club for an innovative idea that other local jurisdictions might want to consider--donating their surplus bikes to needy adults, such as migrant workers, who can use the bikes for much-needed transportation. There are several organizations in the area that will take used bikes and distribute them to the needy. Below is the article that appeared in last month's Island Reporter.

On July 15, the Sanibel Bicycle Club oversaw the transfer of donated surplus bikes from the City of Sanibel to a representative from the Redlands Christian Migrants Association (RCMA). These bikes will go to benefit migrant workers in Central Florida.

Patti Sousa, representing the Sanibel Bicycle Club, explained that the organization has done this for the past three years.

"The bikes go to migrant workers who can’t afford transportation otherwise," said Sousa. "We’ll be making another delivery in February or early March, or even in the fall if we can get enough bikes.”

City Manager Judie Zimomra said of the partnership, this is “a classic example of how items can be reused and diverted from the waste stream.”

Sousa went on to say that, at times, people are lined up waiting for the delivery of the bikes and they go quickly.

"(The RCMA) are very well organized and easy to work with," she added. "If for some reason they can’t give all the bikes away, they’ll be given to another non-profit for distribution to those who need them."
Posted by Darla at 8/18/2011 04:05:00 PM