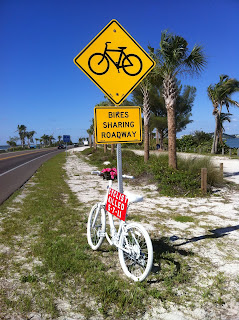 A group of Lee County mavericks is using
the cover of night to deliver a potent
reminder: Lee County's roads can be
dangerous places for bicyclists.

Over the past two weeks, bicycles painted
white and stripped of their gears and
chains began appearing at three locations
where bicyclists were killed earlier this
year.

Each of the memorials has a red sign with
white stenciled lettering that reads:
"BICYCLIST KILLED" and the date on which
that particular person died.

Only a handful of people know who is
behind the appearances of the bikes - and
they are keeping quiet.

"They're called 'ghost bikes,'" said Dan
Moser, director of the Florida Bicycle
Association. "They've been around for
about 10 years, but the one near the
causeway was the first one in Lee County."