Every two years the National Complete Streets Coalition/Smart Growth America issues a report on pedestrian safety that ranks states and metro areas around the country, based on how deadly they are for people walking. The 2019 report was released today, and shows that our streets aren't getting safer.  In the past decade, the number of people struck and killed while walking increased by 35 percent.  So long as streets are built to prioritize high speeds at the cost of safety, pedestrian fatalities will remain a problem. 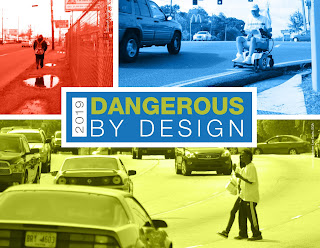 BikeWalkLee's statement re: the 2019 report will be posted later today, so check back on the BWL blog later today.

Below are several graphics that highlight some of the key findings: 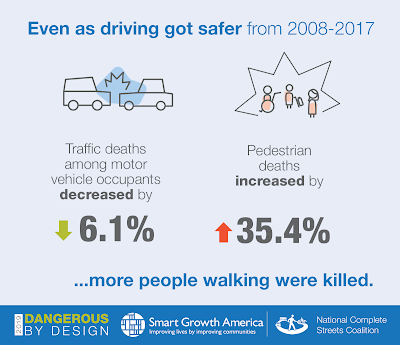 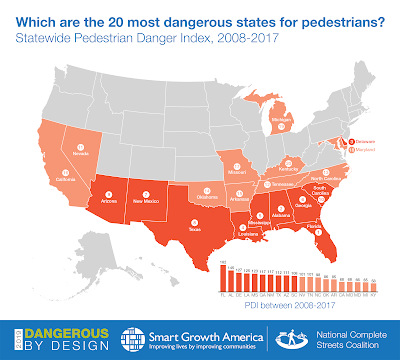 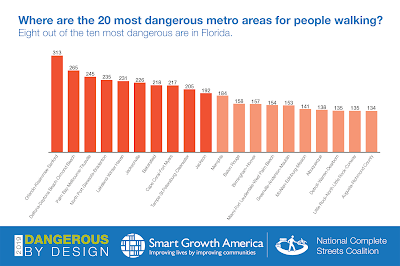 WEBINAR Announcement:
To learn more about the report and to ask questions, join a public webinar tomorrow, Thursday, Jan. 24th at 2:30 p.m., hosted by the National Complete Streets Coalition.  Click here to sign up.


Pedestrian fatalities have been on the rise over the last decade with nearly 6,000 people killed while walking in 2017. However, the risk of being hit and killed is not the same in every place, and that risk is increasing more in some communities than others.
The National Complete Streets Coalition will release Dangerous by Design 2019 on January 23, 2019, ranking each state and the 100 most populous metro areas based on how deadly they are for people walking. In this webinar, we'll explore the results in the report and speak with experts about what can be done to make walking safer and save lives.
Dangerous by Design 2019 creates a "Pedestrian Danger Index" (PDI) for each metro area and state using the most recent federal data on pedestrian fatalities from the Fatality Analysis Reporting System. The PDI is based on the number of people struck and killed by drivers between 2008 and 2017 while walking, controlling for the number of residents and the number of people that walk to work.
About the presenters:


Please register for this meeting.