Editor's Note: Dan Moser will be on WGCU's Gulf Coast Live call in show on Monday, 11/13, at approx. 1:30 p.m. to discuss LAB's report card. Florida State Senator Kathleen Passidomo, a supporter of our cause and a sponsor of vulnerable road user bills, will also be a guest.

If you came home with a report card similar to the one Florida just received from the League of American Bicyclists, grading the bicycling environment, you might be happy but confused. While we received a solid “B” there are so many negatives noted that it would make you wonder how that “B” is possible.

LAB’s 2017 Bike Friendly State Report Card (bikeleague.org) ranks Florida 15th out of 50 states, up from 24th in 2015, the date of the last report and 28th in 2014. We fare very well in most categories, ranking 8th best for infrastructure and funding; 6th for education and encouragement; 3rd for policies and programs; and 10th for evaluation and planning. Much of those good marks can be attributed to Florida Department of Transportation’s commitment to Complete Streets, both in policy and practice, something that’s trickling down to county and other local governments, at least to some degree. 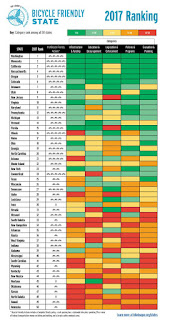 Anyone who has a disability, rides a bike, walks or runs should be thankful for this major change of approach to infrastructure planning and construction by FDOT. It’s due to the herculean efforts of Billy Hattaway, our area’s former FDOT district secretary. And he made it happen not just in our district but statewide. However, there remain key weak points that even he could not affect.

Florida is near the bottom in legislation and enforcement, ranking 42nd. The report stated, “Florida has a long and sustained record as one of the most dangerous states for bicyclists. Florida has the highest per capita bicyclist fatality rate by two standard deviations and this rate is increasing. This extraordinary safety crisis deserves extraordinary actions by FDOT and all communities in Florida to improve traffic safety, particularly for people who bike and walk.”

At the state level, Florida fails to enact legislation to make our roads and paths safer for all users. In particular, LAB points to the lack of any real distracted driving laws or penalties and the legislature’s obsession with banning all local governments from using photo-enforcement of traffic laws. Ironically, the few laws that have been put in place have made it less safe for cyclists and pedestrians.

LAB notes the need to rescind the relatively recent change to the law that now requires bicyclists use bike lanes when they exist. While this may seem like a no-brainer, the fact is that far too many bike lanes are poorly designed, not adequately maintained, or made unusable by illegally parked vehicles and other obstacles. Florida Bicycle Association (floridabicycle.org) has been a strong opponent of this law, legislation that was slipped into a catchall bill at the end of the session a few years ago.

Another area needing to be addressed is Florida’s lack of a statewide bicycle plan. We have a state trail plan, something that has allowed local governments to tap into funds they’d otherwise not have access to. An on-road bike plan would do the same, as well as assist local jurisdictions when developing their own plans, as has been the case with the SunTrail Plan. Funding is also a shortcoming, according to the report, which gives us a low mark for policies that limit the ability to fund bicycling and walking infrastructure. Finally, other than counting bike/ped crashes, injuries, and fatalities — for which we have far too much experience and opportunity — data collection on users and latent demand needs to be significantly improved. In Lee County we essentially have no such data collection ability or programs other than when consultants are called in for specific projects.

Florida did well on advocacy and FDOT’s education efforts but not so good on driver education. Local efforts led by BikeWalkLee, Lee County Injury Prevention Coalition, Stay Alive…Just Drive!, Lee Trauma Services and others are always working to fill those vital needs.

Local governments should also heed the LAB report. The urgent call to take immediate and significant action to reverse our record of being the most dangerous place in the U.S. for non-motorists is the loud and clear message. For more about these matters visit BikeWalkLee’s blog at bikewalklee.blogspot.com. ¦