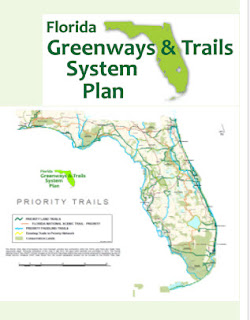 Since BikeWalkLee's inception in 2009, it has been a strong supporter of the vision of a connected and integrated statewide trail system throughout Florida.  [BWL 2016 Letter ] While a statewide trail map was developed in 1998, the initiative gained momentum beginning in 2014 when the State Legislature provided annual funding ($25 M/year) for the SUN Trail program that uses the Florida Greenways and Trails Plan and maps to prioritize funding for the system.  This Plan and maps (last updated in 2015) will guide implementation of the connected statewide trail system from 2018 through 2022.  Since 2015, the Lee MPO has proposed several new segments for the trail, which need to be incorporated into the updated maps.

We are concerned that the revised statewide trail maps contained in the draft FGTS update have deleted the Seminole Gulf Railroad right of way corridor between Bonita Springs and Estero that has been on the FGTS map since the beginning as the primary spine for the Southwest Coast Connector (aka Gulf Coast Trail) in Lee County,.  It is critical that this trail be added back as a Priority trail before the update is finalized.  Why is this important? Because being a "Priority Trail" gives you priority for SUN Trail funds.  Bonita and Estero officials have been working jointly over the past 8 months to move this "rails-to-trails" project forward, with strong support from their communities. 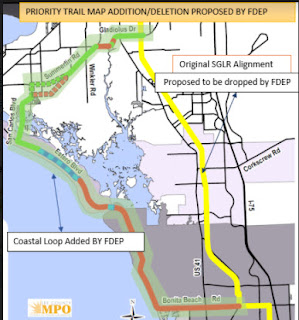 Please submit comments in support of this project as requested in the Lee MPO's email request (see below), or attend next week's public workshop in North Port (9/14) to express your support in person.  Thank you!
Introduction (by Office of Greenways and Trails)


"The Florida Greenways and Trails Plan establishes the vision for implementing a connected statewide system of greenways and trails for recreation, conservation, alternative transportation, healthy lifestyles, a vibrant economy, and a high quality of life. The Office of Greenways and Trails (OGT) is updating the FGTS 5-Year Plan and holding 14 public open houses throughout the state. "

The Florida Department of Environmental Protection has released itsFinal Draft Priority Trails Map for the Southern Region that includes Lee County, and it is disappointing to see that they have removed the Seminole Gulf Railroad (SGLR) alignment from the Draft 2018-2022 Update of the Priority Trails Map. This is inconsistent with the Lee MPO Board resolution that was adopted back in February 17, 2017 which urged the Florida Greenways and Trails Council to (1) add the proposed Coastal Loop to the Priority Trails Map while (2) maintaining the SGLR Right of Way as the primary spine for the Southwest Coast Connector (aka Gulf Coast Trail) in Lee County, and thereby continuing to maintain that alignment in the Priority Trails Map. That resolution was transmitted to the FDEP Office of Greenways and Trails (OGT) staff on the same day it was adopted by the Lee MPO.

Staff had subsequent discussions with OGT staff where we had consistently and repeatedly urged OGT staff to recommend that the SGLR alignment be maintained while adding the Coastal Loop in the Draft Priority Trails Map Update. They had said that the OGT Council would not approve loops in urban areas, yet OGT staff went and added a proposed loop trail requested in Sarasota Manatee County in the draft Priority Trails Map for Council consideration, but denied our request. The Sarasota loop trail can be found in the West Central Florida Region Map.

A Joint Resolution was adopted by the Central Florida MPO Alliance and the TBARTA MPO Chairs Coordinating Committee in June 16, 2017, that had endorsed the Lee and other MPOs proposed changes to alignments in their respective counties to the South West Coast Connector (aka Gulf Coast Trail).

In addition to Samantha Browne, please cc OGT Council Chair Brian Smith at smithozona@gmail.com . We would like you to send your comments as soon as possible, and if possible attend one of the public open houses either in Sebring or North Port for input on the draft priority map for the Southern Region to express your concerns in person. The open houses in Sebring and North Port are as follows:

9/6/17 UPDATE: SEPT. WORKSHOPS POSTPONED DUE TO HURRICANE IRMA
"The Public Workshops scheduled for September (see below) will be rescheduled for a later date due to the potential of Hurricane Irma impacting the state.  This will allow individuals to focus on preparing their communities and families for the storm.  The Office of Greenways and Trails will send out more information once new dates have been confirmed."