Are we making progress?

July is historically a slow month in local government, as the Lee County Board of Commissioners takes its annual month-long hiatus. The Lee Metropolitan Planning Organization’s July meeting and its advisory boards are also canceled, meaning not much gets done in the way of transportation decision making. Fortunately, local municipalities have been meeting regularly, so there’s at least some hope of summertime progress towards improving the bike/ped environment here.

I’m concerned about any pause because six months after the release of the latest Dangerous by Design report (smartgrowthamerica.org/dangerousbydesign) there appears to be little to no political will to deal with the fact that Lee County is ranked as the most dangerous metro area in the U.S. for pedestrians. 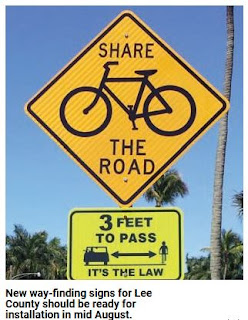 At the time of the study’s January release, BikeWalkLee called “on all local jurisdictions, the Lee MPO, Florida Department of Transportation, and the Lee legislative delegation to act now to make pedestrian and bicyclist safety a top priority and to make the necessary investments to have safety improvements on the ground as soon as possible. The stakes are high and the collective actions by all jurisdictions must be commensurate with the stakes.” But alarm bells that have been sounded from the report itself, BikeWalkLee, Healthy Lee, and others did not create the sense of urgency that one would expect.

But it’s not all bleak. One major infusion of resources that is already be making a positive impact is about to wrap-up. Most of the projects identified in the $10 million Transportation Investments Generating Economic Recovery grant that was awarded to Lee County MPO in 2013 have been completed.

But one last element — added when it was determined funds were left over — is still in the works. According to Don Scott, Lee MPO director, “The design package for the installation of the way-finding signs is currently being worked on, with completion of those planned for the middle of August. The signs will then be fabricated (takes four to six weeks) and then will be installed. The other TIGER facilities, sidewalks, bus stops, pathways, etc. have been completed but there are some remaining punch list items that are currently being addressed.”

These improvements not only provide better access for non-motorists but will also potentially equate to a reduction in crashes involving pedestrians and cyclists. Time will tell.

Another positive to report on is actually a planning tool. The Lee Countywide Bicycle/Pedestrian Safety Action Plan that was created in 2013 in an effort to make it safer for non-motorists is about to be revised. Lee MPO, the lead agency in the undertaking as well, has gotten the scope of work for the consultant approved by the Bicycle/Pedestrian Coordinating Committee and will next go to the MPO’s other advisory boards and then the full MPO board later this month for final approval. Advertising for consultants will follow. Besides having the right consultant on board, public input is important so weigh in with your ideas and insight. You can read the current plan at leempo.com and send your comments along to them.

It’s also encouraging to see a number of bike and pedestrian projects and studies being undertaken by our municipalities. Bonita Springs’ beautiful downtown re-do is taking shape with traffic calming and walkability the key features. Sidewalk repairs and replacement work is happening throughout the city of Fort Myers, although there are still many busy streets in long-established neighborhoods still lacking adequate infrastructure. And Fowler Street between Hanson Street and MLK/S.R.-82 — the last unimproved segment of the Metro corridor — remains our area’s worse overall arterial roadway, thanks to the city dragging its feet since the late 1980s. By now FDOT should have moved forward with their own design since it is, after all, their roadway. ¦