As we reported in April, the City of Cape Coral is developing a Bicycle and Pedestrian Master Plan. The goal of the plan is to provide a research-based roadmap for the City to become a safer, friendlier, and more attractive cycling and walking community for all residents and visitors.

The plan is funded through a $150,000 state grant via the Lee County Metropolitan Planning Organization and will be completed in 2017.


After the public kick-off meeting in April, the consultants and the City did a great job at collecting and analyzing large amounts of data. With the expertise of the consultants and a wealth of public input via the community input map, the plan is now reaching the draft stages.

A look at the community input map shows the engagement of the people of Cape Coral, with valuable suggestions and innovative ideas for better and safer (bike) paths, intersections, and other improvements everywhere you look.

So save the date of Wednesday, August 24, bring your friends and neighbors, and come to the community workshop at the Cape Coral Public Works Building (Green Room),  815 Nicholas Parkway East, from 5:30 to 7:30 p.m. 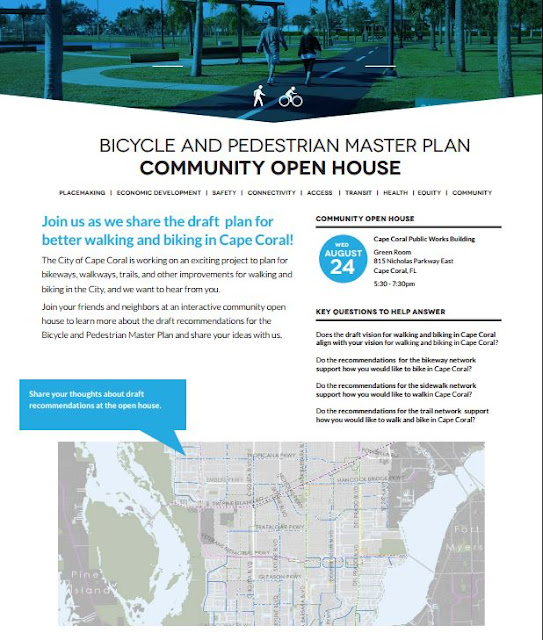