Exciting to see new biking and walking facilities being constructed as part of the TIGER grant, and to see local communities organizing more events to encourage people to try walking or biking in their neighborhoods.

And see the video produced by the Lee MPO project team.  Note--photos below were taken by QCA as part of MPO project (replaced the photos in the News-Press article)

May is National Bike Month and Southwest Florida is getting in on the celebration.

In the next two days, a pair of complete-streets projects in Lee County will display path and street improvements that will help walkers and bicyclists.

On Friday, San Carlos Park Elementary School students and their families are invited to take part in the Tiger Walk and Bike to School Day. They’ll walk on the new sidewalks in the San Carlos Park community. The event will start at 7:15 a.m. 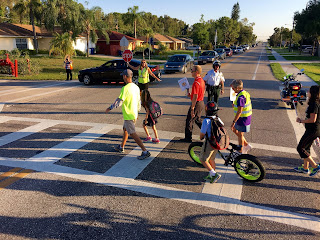 On Saturday, cyclists can take part in a leisurely 3-mile bike ride that starts and ends at Liles Hotel in Bonita Springs. That event will run from 4-5:30 p.m. It’s a chance for families to see Bonita’s downtown redevelopment project.

“They’re kind of unrelated how they came about, but they really are connected,” said Darla Letourneau of BikeWalk Lee. “We have to have connected, accessible, safe facilities before people will bike and walk. We have facilities but there are gaps and we’re starting to fill the gaps.”

Students will leave Karl Drews Park at 7:15 a.m. and walk and bike together along Lee Road to San Carlos Park Elementary School on the brand new sidewalk. Students are encouraged to join in along the way. 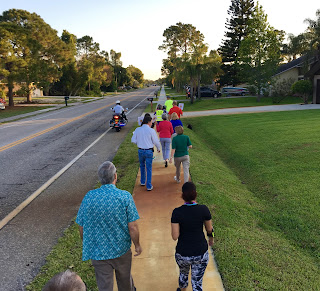 “San Carlos now has a sidewalk system that goes from U.S. 41 on Lee Road all the way up to Alico Road,” Letourneau said. “It’s all connected. Now you can safely walk or bike whether you’re a kid or adult.”

Crews recently completed work on new bike lanes along Corkscrew Road and Six Mile Cypress Parkway. Other parts of Lee that will benefit from the grant are Colonial Boulevard, Daniels Parkway and Florida Gulf Coast University.

The project connects three major portions of Lee: the Tour de Parks Loop, the University Loop and the Bi-County Connector. Together, the three segments form an 85.4-mile combined system for walking, bicycling and transit.

Bonita Bike Tour
The first Bonita Springs Historical Bike Tour will pass some of the city’s biggest landmarks.
The event is put on by the Bonita Springs City Bike/Ped Advisory Committee.

“One of our main reasons for having the event is to bring awareness to our safety advisory committee,” said Lindsay Rodriguez, a planning technician with Waldrop Engineering, which is involved in the redevelopment of the city’s compete-streets focus.

“People also can see the progress of redevelopment. And it’s National Bike Month. We have a beautiful city and amazing historic sights so this gives us a chance to promote our downtown.”

Those who register by e-mailing lindsay.rodriguez@waldropengineering.com will be eligible for prize giveaways.

Helmets are required. Bike lights will be given out as well as refreshments.