At the May 18th Bonita Springs City Council meeting, Ian Lockwood of the Toole Design Group presented the results of the Beach Beach Road visioning study, requested by Council last year.
The study, the result of a series of public workshops this winter, resulted in a proposed vision for this corridor that is a complete streets approach, complete with roundabouts, separated bike lanes, sidewalks, lane width reductions, more inter-connectivity of local streets, and attractive landscaping throughout.

Council members were enthusiastic about the vision.  Lockwood said the biggest challenge ahead was the need for cooperation between the city, Lee and Collier Counties, and FDOT. In terms of the immediate priority, he suggested that the City work to preserve the existing road network so that it remains available to create the connected street network envisioned in the vision study. 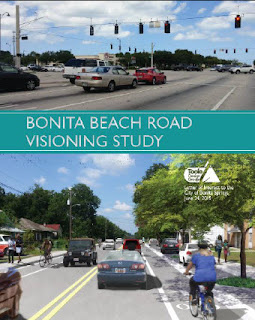 The next step is for Toole to submit a final report, which will be available on the City's website.  At the June 1st Council meeting, the Council will consider a proposal to extend the contract with Toole Design, which would include having them play a "quarterbacking" function for all the related projects currently underway in the city. 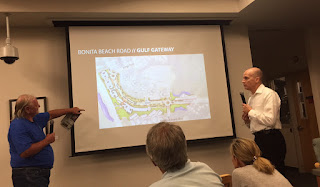 
Below is the Naples Daily News May 19, 2016 article about the May 18th Council discussion: Bonita Springs City Council hears plans for busy road , by Patrick Riley.


After years of traffic on Bonita Beach Road, Bonita Springs has a road map that could make the 7.5-mile east-west corridor safer and more attractive and efficient.

The goal is to transform Bonita Beach Road from its "freeway-like" appearance to a "town-like" road, especially near the beach and the city's downtown area, said Ian Lockwood, regional office director at Toole Design's branch in Orlando.

"There's other places like the commercial area and the (Interstate 75) area, which has a slightly different scale, but on the edges we still want it to be friendly for the bikes and pedestrians," Lockwood said.

The corridor connects Bonita Springs' beach to its only I-75 exit and — despite running six lanes wide at its broadest segment — is prone to traffic jams and slowdowns.

The roundabouts, Lockwood said, would save drivers gasoline because they're idling less, reduce pollution and noise levels, and allow pedestrians to cross the street in a safer manner.

They also dramatically reduce the risk of accidents by allowing cars to flow steadily and at safer speeds, he said.

"Nobody speeds up for a roundabout," Lockwood told the council. "But I imagine everybody in the room has had a stale green light in front of them and thought, 'Maybe I should speed up so I don't get caught at the red.' And that's how people get injured and killed."

Toole Design's proposal also includes landscaping upgrades along the corridor and the addition of bicycle lanes.

Though the council has yet to adopt Toole Design's vision for Bonita Beach Road, councilors lauded the plan.

"As many of us know, the original comprehensive plan for Bonita Springs from the year 2000 had a vision that said (Bonita) Beach Road should be a beautiful, commercial parkway," Deputy Mayor Peter O'Flinn said. "This is a huge step, 16 years later, toward that."