How are we doing on campaign to make Lee County safer for walking and biking?: A 2015 midyear review

At the halfway mark through 2015, it's time to look at the bike/ped injury and fatality data and see how we're doing towards our goal of making Lee County a safer place to walk and bike.  While the data to date (Jan. - June 30, 2015) indicates that Lee County is not likely to repeat last year's shockingly high bicyclist fatality number (9), our pedestrian fatalities numbers are rising.  Most troubling, injury levels for both cyclists and pedestrians are heading in the direction of record highs by the end of 2015.


During this same period, there has been a great deal of media attention and local government activity aimed at making our communities safer for biking and walking--from the News-Press "Share the Road" campaign and in-depth feature stories on cycling dangers and ways to make our community safer; the Bicycle Friendly Communities national expert visits to four local communities; three Lee County cities signing on to USDOT Secretary Foxx's Mayor Challenge to address bike/ped safety; to targeted education and enforcement efforts by local law enforcement agencies.

The bottomline is that while there are lots of efforts underway to make it safer for people walking and biking in Lee County, we need to step up our game, if we expect to lower our stubbornly high bike/ped fatality and injury numbers.

Background
Lee County has consistently ranked in the top quarter of the most dangerous areas in Florida for pedestrians and cyclists...in a state that is the most dangerous state in the country for these vulnerable road users.  In September 2013, the Lee MPO Board adopted a Countywide Bicycle and Pedestrian Safety Action Plan aimed at reducing bicycle and pedestrian injury and fatality crashes through a wide range of recommended activities--from education, engineering, to enforcement.  The Action Plan focuses on 18 specific recommendations (both short-term and long-term), with specific milestones and assignments for action.  Click here to review the plan.

The Lee MPO staff reports to the MPO Board at least every quarter on the status of bike/ped crashes and implementation of the Action Plan, and updates a series of graphs that track the bike/ped injury and fatality numbers from 2000 to 2015, with the latest monthly data.

Bike/Ped Injury and Fatality Data
Below are the graphs prepared by MPO staff (thanks, Brian Raimondo) that tell the story about how we're doing so far in 2015 at the halfway point, as compared to previous years.  Here's what we know: 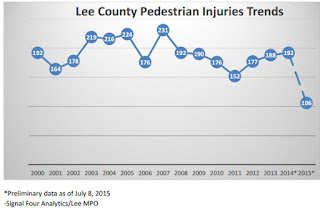 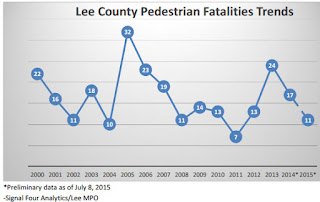 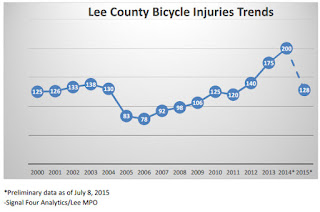 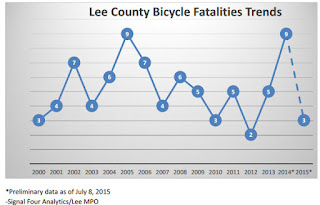 Even more troubling is the upward trend in both bicycle and pedestrian injuries.  To date, we've already had 106 pedestrian injuries and 128 bicycle injuries.  Historically, about 54% of our bike/ped crashes occur in the first 6 months of the year, with about 46% in the last 6 months of the year.  if those trends hold, we could see historic highs in injuries, esp. for bicycle injuries, which have been trending up each year since 2006.  Although we don't have the breakdown yet for how many of these are "hit-and-run" cases, this is something of grave concern, as Lee County saw a 50% increase in these cases over the past two years.

Although it's too early to know whether these trends will hold for the remainder of the year, any way you look at it, having 14 fatalities and 234 injuries in the first half of this year is not welcome news.
Below are links to the four safety-related efforts underway over the past six months: 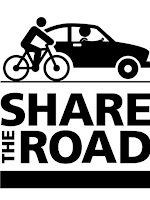 For more than a year, News-Press has focused on bicycle safety issues and what can be done to make SWFL roads safer for cyclists through their "Share the Road" campaign and in-depth feature reporting.  So far this year, they have done two major in-depth features-- one in March and one in June. (see links below)

The media coverage has helped raise awareness about the problems and the responsibilities of everyone for taking action to address them--from individual citizens' roadway behavior and attitudes, to elected officials and law enforcement officers.  In June they focused on both national and local solutions to create a bicycle-friendly environment, and left us with a bottom-line message:  we need to step up our game!

BikeWalkLeeBlog: January 8, 2015:  BWL Column: Outbursts highlight misconceptions, safety issues
(BWL's response to some comments in letter to editor to dispel myths and explain what it means to share the road.)

BikeWalkLee Blog: June 8, 2015: Using the Mayors' Challenge as a local advocacy tool
(BikeWalkLee's Darla Letourneau was interviewed by the League of American Bicyclists (LAB) for their feature story on the Mayors Challenge and how it can help local communities.)

3.  LAB's Bicycle Friendly Communities' visits to Lee County
Lee County was selected as one of the 100 communities that the League of American Bicyclists (LAB) visited in 2015, as part of its new initiative to bring bicycle-friendly expertise directly to the local level.  These visits are an opportunity for local communities to get some hands-on technical assessment of its bicycling infrastructure and to learn about best practices from other communities, with the goal of making communities such as Lee County more bicycle friendly. In January and February 2015, BFC's Steve Clark visited Sanibel, Bonita Springs, Cape Coral, and Fort Myers.  Making SWFL communities more bicycle-friendly also means they're safer.

FDOT grants to the Lee County Sheriff's Office, Florida Highway Patrol, and the Cape Coral Police Department are supporting special high visibility education enforcement operations in selected "hot spot" areas, as part of a comprehensive safety campaign that promotes safe pedestrian, bicyclist and driver behaviors. In addition to these operations, other initiatives have been undertaken by the Cape Coral Police Department and FHP, as noted in the blog posts linked below:

BikeWalkLee Blog: February 16, 2015: Florida Highway Patrol launches hit-and-run awareness campaign
(FHP launched an awareness campaign to address the increasing number of hit-and-run crashes in Florida.  Between 2012 and 2014, cases of hit-and-run collisions in Lee County increased by 50 percent, and we know that a disproportionate number of the victims are pedestrians and cyclists.  As a society, there should be zero tolerance for drivers who hit and run.)