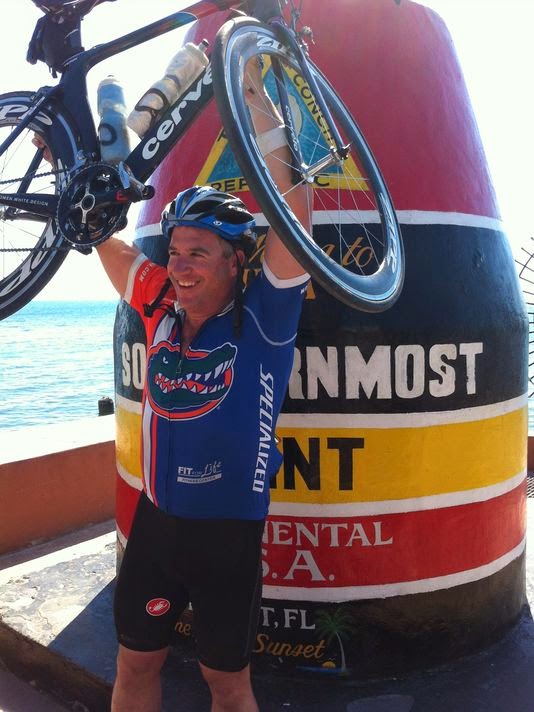 As part of News-Press' continuing focus on bike/ped safety, today's Opinion Page includes a commentary by local cyclist Craig Hersch about the need for cyclists and motorists to be vigilant and understanding around one another.  Thanks to both Craig and News-Press!

News-Press, Sunday July 20, 2014
Commentary by Craig R. Hersch
I was nearly killed while bicycling 10 years ago by a hit-and-run driver. In recent days, much has been written on these pages about bicyclist/motorist animosity. Some letters reflect a shocking amount of misunderstanding regarding cyclists' rights on our public roadways.
While many bicyclists can and should do a better job of following traffic laws, motorists also need to be more patient and considerate. Since this is an issue near and dear to me, please allow me to explain some very valid reasons why cyclists will do some of the things that drivers mistakenly categorize as wrongful acts.

Why cyclists ride two abreast at times:
Cyclists typically ride in a pace line in the same direction as traffic as is required by Florida law.
Cycling etiquette calls for everyone to take their turn at the front of the line since wind resistance causes those in the front to have to work about 30 percent harder to keep the same pace as those in the back.

The pace line rotates from back to front, with those peeling off the front riding two abreast (as Florida law allows) until they reach the back. It typically takes less than a half minute or so for the front rider to rotate to the back, and he commonly looks over his left shoulder to make sure that the lane is clear before rotating.

Why cyclists may suddenly veer from the bike lane into the lane of traffic:
You wouldn't believe the amount of glass, road kill, nuts, bolts, nails and other debris in the bike lane. Sometimes bicyclists have to move quickly into the traffic lane to avoid hitting the debris and wrecking or flatting — which can be very dangerous when you are riding on busy roads at speeds over 20 mph. Even puddles can be dangerous as they may contain unseen potholes or other dangerous debris.

It is incumbent upon motorists to ensure that there is at least three feet (as Florida law requires) between the car/truck and a bicycle when passing. Three feet should provide more than enough room if a cyclist has to veer around an obstacle, or worse, if a cyclist crashes, those three feet can serve to provide the room necessary to not being run over.

Why cyclists may not react quickly to an approaching vehicle:
Many cyclists are in it for the fun, camaraderie and exercise. Particularly on an early weekend morning with little or no traffic, we may be riding two abreast (as the law allows) and not realize an auto or truck is approaching.

Cyclists get a lot of wind noise and we don't always hear a motorist approaching from behind. A friendly tap on the horn to warn us usually results in the group forming a pace line within 30 seconds, allowing the motorist to pass.

There is no good reason for hostility between bicyclists and motorists. Most bicyclists, in fact, are also motorists, but the converse isn't true. If bicyclists cause you a few moments delay in getting to your destination, is it really that big of a deal?

I want to thank The News-Press readers for sharing the road and being kind and patient with one another.

Craig R. Hersch is an avid bicyclist and triathlete when not practicing as an estate-planning attorney in Fort Myers.
Posted by Darla at 7/20/2014 06:33:00 AM