Thanks to the Fort Myers Beach Councilman Andre and Local Planning Agency  for inviting BikeWalkLee's Dan Moser to participate in a bike audit of Estero Blvd., along with a team from FMB, an FDOT official, and SAJD.  This week's Fort Myers Beach Observer newspaper has an excellent article highlighting the findings of the bike audit's participants. 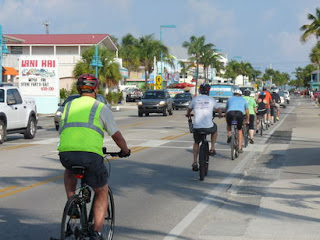 Anyone who has ever ridden a bicycle on Estero Boulevard knows that navigation on that County road can be difficult if not down-right dangerous, especially with the Beach's narrow segments known as the Core area and Civic Complex sections.

A planned Saturday bicycle ride involving Town officials and other outside groups confirmed that fact.

Due to only 50 feet of right-of-way on those segments and an uneven terrain, the bicyclists faced issues such as narrow passageways, bumpy situations, vehicle egress and ingress off of side streets and some traffic worries like vehicles getting too close as they passed by.

A planned bicycle ride involving concerned officials from both Fort Myers Beach and off-island checked out the Estero Boulevard “bike lane” conditions both on the County-owned section and on North Estero Boulevard, a project completed by the Town in 2011.

Overall, it was just another day on his Beach bike for Councilman Dan Andre, an avid bicyclist who peddles as a main form of transportation on the island. He would like to see bike paths and sidewalk work done in the near future instead of a delay of three or four years or longer for the expected Estero Boulevard Improvements Project to address the issue.

"I think money should be spent to get bike lanes and sidewalks right away, especially the Core section where I think a bike lane is needed the most," said Andre. "How many years has this Town not had a contiguous sidewalk? It has never had one. We are trying to mitigate traffic on the Beach, but nobody is doing anything to get people out of their cars. It's frustrating that nothing has been done. I think it is not a huge expense to put a little bike path and sidewalk in even if you have to tear it up four years from now. That's four years you get people out of their cars and riding bikes."

"I was encouraged that Dan Moser said that Estero Boulevard is BikeWalkLee's No. 1 priority," Andre said."They want to focus on this (road)."

Monroy, who has been on her current job for just a month, brought her husband and daughter along.
"There is certainly a different perspective when you are on the road, out of your vehicle and on a bicycle," she said. "I refuse to believe that the problem isn't fixable. I think we have the resources to address the problem. Being new to the position, its was important for me to be out here and see what the conditions are for myself and to get some feedback from the people that we rode with. I think there is certainly a will to fix the problem and address some of the concerns. There are a lot of interested parties that are very invested in the success of the road network out here. So, I do not see why it is not doable."

Dan Moser also hoped a couple more officials from Lee County planning or DOT had showed up for the ride.

"It really is a county issue. I think the ride reinforced a lot of the things that we knew were the problems," he said. "If you look at the difference between the Town's road at the north end and this stretch, there is a lot of room for improvement with the understanding that there a lot of different dynamics down here. It's clear you have something for the bicyclists and pedestrians. It's not just about moving cars."

Anderson, who is also executive director of STAY ALIVE JUST DRIVE, said he stayed on the Beach for the past two weeks and observed and experienced the road and bike lane conditions first hand.
"There are constraints. You can only go so far," he said. "We need to make it more user friendly."

Andre is adament about making sure there are bike lanes on both sides of the boulevard throughout the island once the design plans for the upcoming Estero Boulevard Improvements Project are finalized. The proposed improvements to the main road include crosswalks, bike lanes, landscaping and more, but two options for design on those aforementioned narrow segments have been discussed: one that keeps the middle turn lane but, due to only eight feet for pedestrian use, according to Lee DOT, doesn't have separate bike lanes; and another that offers the bikes lanes, but loses the middle lane for turns and emergency vehicle access.

"(At the Estero Boulevard Improvements Project workshop held in late February) none of the plans showed a bike path in that Core area from Tropical Shores to Times Square," he said. "They showed either landscape and a sidewalk or a center lane. I say we take the landscaping out of it, put a bike lane in there, and maybe the Town can buy some trees and ask the business owners to plant them and landscape their lots."

"It's very important," he said. "That's the biggest problem on this road. There are no frontage roads. There is no way to divert traffic. You cannot limit access."

Moser also believes a center lane, bicycle lanes and sidewalks on both sides of the road should be constructed. He stated bike lanes can be four feet instead of Lee DOT's required five feet.

"Absolutely. There are ways to get some kind of managable dedicated, middle-turn lane and squeeze those bike lanes and sidewalks in there," he said. "You want to keep that stretch of traffic (Matanzas Bridge to Donora Boulevard) slow by design. You don't want to induce people during a regular traffic flow to go any faster (than the posted 25 MPH)."

Monroy stated the Lee County Metropolitan Planning Organization wants to undertake an alternatives analysis and bring all the stakeholders together. She told Andre to take any initiatives before MPO.
"There just has to be consensus on what problem they are trying to address first, and then bring all the stakeholders together to build that consensus process," she said. "We certainly will be one of the stakeholders that will bring resources to the table and see if we can facilitate or help the process."
A bicycle/pedestrian safety coordinator position has recently been added to the local FDOT office.
"It's a huge part of our safety initiative," she said.

The County DOT is weighing all options with community consensus added by way of public input for the entire six-mile project that is expected to begin during the 2014 fiscal year. The Estero Boulevard Improvements Project will involve concepts presented in the Town of Fort Myers Beach Streetscape Master Plan, which includes six segments: the completed North End, Core Area, Civic Complex, Quiet Center, High Rise Resort and South End.