April is Distracted Driving Awareness Month.  Thanks to BoCC for raising awareness of this issue with its proclamation, and to the Stay Alive..Just Drive! coalition for focusing the community's attention on this dangerous epidemic. 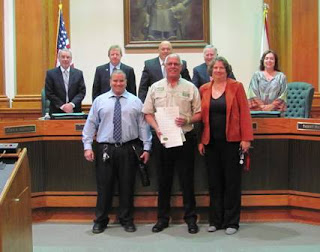 In accepting the proclamation, Jay Anderson stated that after many years of effort it looks like “this will be the year that the Florida legislature passes a reasonable law addressing distracted driving”, specifically addressing texting.  He cited a recent headline from a national Highway traffic safety administration study indicating that at any moment there are some 660,000 drivers on our roadways giving their attention to their cell phones rather than their driving.  He has summed up the problem in the statement, “When you drive distracted, we’re all impacted".

Commissioner Frank Mann asked if the County had its vehicle policy, one that “puts our money where our mouths are”.  Jay assured him that we do, and in fact it is a model policy for the state, reflecting comments made by Ann Pierce of Bike Walk Lee, that while Lee County staff and Commissioners have produced exemplary policies, it is our driving culture that must be changed.

This is a cultural change that will see its beginning with the kickoff of FDOT’s “Alert Today, Alive Tomorrow!  Safety doesn’t happen by accident!” campaign in Fort Myers on May 8 & 9.  With one of the ten worst safety records within a state with the worst safety record in the nation, Lee County, can build upon its groundwork of complete streets policies to reverse a culture of indifference to human safety, and one that has inadvertently placed automotive mobility above that of human access and well-being.

Below are Ann Pierce's full remarks on behalf of BikeWalkLee:

BikeWalkLee, a coalition advocating for safe access to all County roads for all users strongly supports public recognition of April as Distracted Driving Awareness Month.

Florida and Lee County are once again on their way to the top spots in the list of those with the most dangerous and deadly roadways.

Think a minute about all the things each of us allows to distract us while driving.  We are literally in the midst of an epidemic, every bit as deadly as that caused by any pathogen.  This is a self-constructed epidemic, but with the same degree of loss and harm to life.

It is also an epidemic illustrative of a loosening of connections to some fundamental values ---- particularly that of human life.

We now accept as routine that pedestrians will be hit and killed, as if it were some inherent and unavoidable “fluke” within the system of high-speed automotive mobility.

A system, which we created to serve human needs, now makes human life and the historical “Right of access”, secondary to moving cars.

Consider that Walking - the most fundamental of human characteristics, and milestone of childhood development, has been officially relegated to “alternative mode”....and a highly dangerous one at that.
The pursuit of eliminating congestion with overbuilt, high-speed roadways, maximizing engineering efficiency, cannot continue to be purchased with the lives of other roadway users.

Lee County, through its Complete Streets policies has taken very significant first steps towards changing our infrastructure, and has been recognized for its leadership.

Tessa LeSage, of the Office of Sustainability has been asked to present the Lee County Complete Streets program at a conference this Thursday attended by U.S. DOT Transportation Secretary Ray LaHood.

Recently Andy Getch of Lee DOT was asked to present the same Complete Streets policies and programs to Broward County officials and personnel.

Conscious intent and much hard work on the part of officials, staff and citizens have produced policies that are exemplary.

But now, it is our driving culture that must be changed - from the top down, as we join FDOT in their campaign for safety in Lee County.

Law enforcement, elected officials, educational programs, including school-based driver's Ed, engineering and planning professionals, and the media, must all be in alignment, in conveying a message of zero tolerance for the disregard of human life.

As a body, we need to embrace and convey “Vision Zero” – a simply stated principle that “No loss of life is acceptable”.

Let’s have no more letters to the editor like that of April 6th, penning a visitor’s parting disgust that our roads are “the most dangerous ever experienced.”