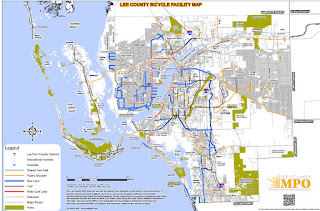 BikeWalkLee's column in this week's News-Press Go Coastal section highlights the new bicycle facilities map produced by the Lee MPO.  Thanks to the BPCC and staff!  Hard copies of the map should be ready for distribution in another week.

The new bike map being produced by the Metropolitan Planning Organization achieves both of those goals. It’s a guide for cyclists who want to transport themselves around the county by bike, to show them the routes available. But it’s also a guide for bike advocates and planners to identify gaps in the current bicycle infrastructure, the places where a little bit of new asphalt could make a big difference in bikeability.

Right now, maps are available online only, but printed versions are expected by the end of February. It replaces the last bike map published in October 2006, and comparing the two shows the significant improvements in bike infrastructure the county has seen in the ensuing six-plus years. Looking at the new map also shows the infrastructure work remaining to be done, where a lack of colored lines or a gap between two existing systems is clear.

Thanks for the MPO map goes to the organization’s Bicycle Pedestrian Coordinating Committee, which spearheaded the update and helped review and verify the routes.

“It was a recommendation that came out of the Bicycle/Pedestrian Master Plan,” said MPO executive director Don Scott. “For the rider, it does encourage use, enticing some people to take their bike instead of driving, giving recreational opportunities and getting out to different destinations.

The MPO hopes to update this map more regularly, perhaps even annually.
“One important part is to keep working on filling in the gaps,” Scott said. “I encourage people who use the map to forward suggestions that we can incorporate into future versions.”

Speaking of maps, if you’re interested in biking to spring training games, BikeWalkLee can help show you the way. On its website you’ll find maps showing routes to both JetBlue Park (for Red Sox games) and the Lee County Sports Complex (where the Twins play). Both sites are bike-accessible from neighborhoods throughout the county – even for those who prefer to ride in a more protected setting. 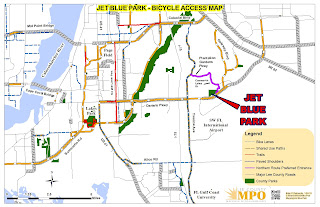 Biking to baseball not only gets you a little exercise (to work up a thirst for that ballpark beer?), but also helps you avoid the pre- and post-game traffic jams. Bike parking at both facilities is a little sparse… but if enough people start showing up on two wheels, perhaps that can be remedied.