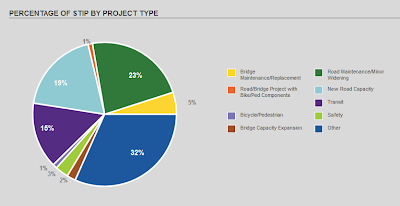 A recent report by the Tri-State Transportation Campaign looked at how all 50 states used their state transportation improvement programs (STIP).  Here's what they reported on Florida.

The Atlantic Cities blog had the following highlights about the new report:

Transportation funding is complex. Literally trillions of dollars are constantly at work or on the boards for one thing or another. The type of spending ranges from building overpasses to laying light rail tracks to painting those white-line bicycle riders on the asphalt in bike lanes. And so much more.
Trying to define exactly where every transportation dollar in the U.S. goes is probably more effort than it's worth. Understanding generally where that money goes, however, is both doable and informative. A new report has tracked the spending priorities of each state, as laid out in their state transportation improvement programs (STIP).