Bicyclists take 'Ride of Silence' to honor those killed 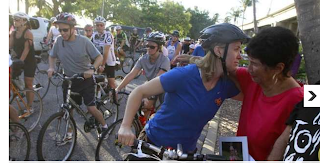 Donna Henault placed her right hand over
her heart as bicyclists coasted past her
underneath the Caloosahatchee Bridge.

In her left hand, Henault held a photograph
of her daughter, 46-year-old Tracey
Kleinpell, in bright pink running gear giving
a peace sign.

In silence, the bicyclists slowly made their
way out of Centennial Park, embarking on
an eight-mile ride in honor of Kleinpell and
other bicyclists killed in Lee County.

More than 100 people in Fort Myers
participated in the "Ride of Silence," which
started in Dallas in 2003.

This year, the event honored two women
killed in Lee County while bicycling in recent
months - Kleinpell and Janet LoFranco....

Dan Moser, a bicycle and pedestrian
advocate with BikeWalkLee, says many
motorists don't realize that bicycles are
allowed to be on the road, too.

"Most of us that cycle are also motorists,"
Moser said. "We've got to be conscious of
sharing the road with others."

What's most frustrating, though, is when
bicyclists are following all the rules and are
still injured or killed in a crash, he said.