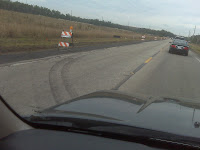 Thanks to BikeWalkLee cyclists who noticed the problems with the Buckingham Rd. shoulders project that had just gotten underway last week. Several cyclists alerted LCDOT that the shoulder pavings were not wide enough and were not smooth, making it dangerous for cyclists. As soon as LCDOT officials were made aware of the situation, they took action and instructed the contractor to mill and repave sections of the shoulder that were out of compliance with the contract. According to LCDOT, once the shoulder work is completed (done with federal stimulus funds), Lee County will overlay the entire roadway (including the shoulders) using their annual resurfacing contract. Thanks to Bert, Jeff, and Steve for effectively raising this with LCDOT, and thanks to Sarah Clarke and Randy Cerchie of LCDOT for taking quick action to resolve the problems.
Posted by Darla at 2/23/2010 09:26:00 PM